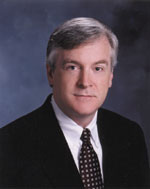 I am considering referring a 51-year-old myopic patient (-1.50D O.U.) for custom LASIK in the dominant eye only (monovision). Are there any concerns about custom treatment of just one eye in this patient?
Of the four doctors interviewed, two were concerned about custom treatment in one eye and not the other. Their concerns:
* The patient could experience a custom LASIK-induced perceptual problem. "If you treated the dominant eye for distance correction and left the non-dominant eye un- treated, will the patient see a significant separation in visual performance?" says optometrist J. James Thimons, of Fairfield, Conn.
To ensure that the patient does not have a large separation of qualitative function, Dr. Thimons recommends you provide her with a wavefront trial lens, which shows what the wavefront correction will be like.
* There are no clinical studies that compare custom monovision LASIK with one eye being done on a traditional platform. "We have no clinical/scientific data to support the fact that this is the appropriate thing to do for patients," says Stephen E. Pascucci, M.D., of Scranton, Pa.

The two remaining practitioners expressed other concerns about this specific patient:
* The patient may have difficulty adapting to blended vision. Doyle Stulting, M.D., of Atlanta, says his concern is not specific to custom LASIK. "I would have the same concerns about creating monovision with custom LASIK that I would for creating monovision using contact lenses or traditional LASIK," he says. "And those concerns are "is this patient a good candidate," and "can she adapt to blen- ded vision?""
Dr. Stulting defines a good candidate as someone who is motivated to rid herself of glasses despite the disadvantages of monovision, and who does not require excellent depth perception or binocular vision at distance or near.
* The patient is 51-years-old. Optometrist Louis J. Catania, of Jacksonville, Fla., says that while there are no contraindications to unilateral custom LASIK, he is concerned about the procedure for this patient, given her age. "Corneal-based refractive procedures are very good, and custom ablation has made higher-order aberrations less of a problem, but this patient is 51 years of age," he says. "Her lens is beginning to have significant effects on her vision, and these procedures have a limited lifetime."
Dr. Catania says he would discuss lens-based refractive procedures with this patient. Specifically, intraocular lenses, such as the Array Multifocal IOL (Advanced Medical Optics) can address both distance and near vision requirements without having to resort to monovision. Another advantage: Because the eye"s crystalline lens is replaced by a multifocal IOL, degradation and impending cataracts are no longer problems for this patient, Dr. Catania says.
Dr. Catania stresses that whenever a patient is interested in refractive surgery, you must discuss all available options at length so that the patient can make an educated decision.
While the opinions on this custom LASIK treatment approach are split, should the patient elect to have the procedure and develop any perceptual issues, she has the option to treat the fellow eye with full or nearly full correction at the expense of her near vision.
Vol. No: 141:10Issue: 10/23/04