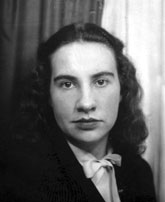 Helen Elizabeth Cummings, born in Archbald, Pa., in 1923, spent most of her first 27 years on earth caring for her mother, while the Great Depression took its toll. She stood in doorways waving goodbye as her sisters went out on dates and thought she, herself, would miss the opportunity to marry  and have children.
I can only imagine how angry and depressed I would be if I were dealt the same hand as my grandmother was. But she"s strong-willed and, by far, the most independent woman I have ever met. She may have gotten a late start (according to the standards of that time), but she was determined to lead a full life.

When her mother passed, Helen was, in a sense, "free." She applied to nursing school but was rejected. "You"re not strong enough to be a nurse," the doctor in charge of admissions had said. "You have a weak heart."
Helen was born a "blue baby," as she calls it, and was not expected to live as long as she already had. But she was not about to let that stop her now.
Without telling anyone, she hopped a train and headed north to Rochester, N.Y. Alone. When she arrived at Strong Memorial, suitcase in hand, she told the intern on duty that she wished to have her heart fixed.
He took the blood pressure in her legs and immediately knew what was wrong. She had congenital heart disease and would need repair of the coarctation of the aorta. The only problem: She needed it more than 20 years earlier. The procedure was experimental in adults. Only three doctors in the United States had performed it, and with limited success.
"Sign me up," she said. Five years later, in 1955, at age 32, Helen Cummings became Helen O"Hara. She gave birth to two children. Then, in 1960, more devastating news: She had cancer and would need a radical mastectomy. Again, I can hardly imagine how news like this would affect me emotionally. But my grandmother sees it as another death sentence averted and wears the battle wounds like a badge of honor. She"s not bitter about it, nor is she depressed.
Twenty-five years passed without incident. Her children were grown, and she was doting over her grandchildren. But she could no longer ignore the obvious: Something was wrong with her heart. She needed to have her aortic valve replaced and required a pacemaker. It didn"t look good. But again, she came out kicking.
Soon, news came that the pacemaker regulating her heart was defective. We were furious. But my grandmother wasn"t. She said, "Let it kill me. You"ll all be rich." We were  flabbergasted. How could she not sink into a deep depression or a fit of rage? We thought she was morbid, as she pasted copies of her living will on all the doors and the refrigerator. But, in the grand scheme of things, this just didn"t matter that much to her. "When my time comes, I"ll go. I just don"t want to suffer," she used to say.
Sadly, on March 8, 1988, she did suffer. She went in for cataract surgery, developed a Staph. infection and suffered a retinal detachment. She has age-related macular degeneration in the fellow eye. It was a major blow to her, and it affected her deeply. No more car, no more knitting, no more lots of things. She was depressed and angry. While she boasts of her other surgeries, she can"t even speak of this one. Every other ailment she"s ever endured was like a paper cut in comparison to blindness.
While my grandmother is certainly unique, her response to vision loss is not. This month, Associate Editor Jennifer Kirby calls to your attention the emotional effects of poor acuity and reports on what you can do to meet these patients needs--even if you can"t restore their vision (see "Seeing Beyond the Eye," page 42). By detecting psychological problems, making appropriate referrals and simply saying the right thing, you can make a huge difference in your patients" lives. It"s not science. But it"s an important story.