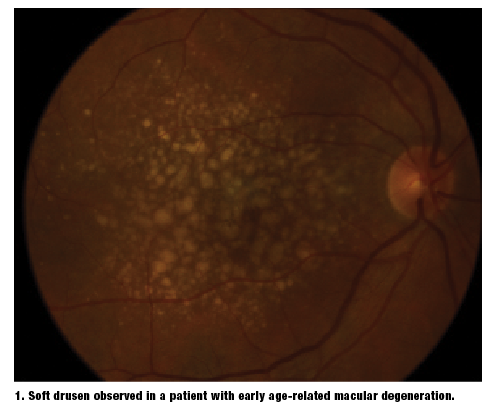 Currently, more than 1.75 million Americans have advanced age-related macular degeneration (AMD).1 More alarmingly, however, that number is expected to increase to 2.95 million by the year 2020.1,2

AMD is a highly complex disease influenced by multiple factors, including age, genetic predisposition, environmental stimulants, and oxidation and inflammation.3

Unfortunately, most eye care clinicians are forced to wait until patients exhibit physical signs of macular damage before advising them how to most effectively prevent disease progression. By then, it may be too late to slow or halt the conversion to neovascular AMD.

What if we could identify those at high risk for progression earlier in the disease process and potentially block the cascade before the onset of significant visual damage? Encouraging advancements in genetic screening, as well as several new and emerging therapies for early AMD, may soon help us achieve this goal.

The Role of Oxidation
The pathogenesis of AMD still remains somewhat unclear; however, oxidative stress is believed to play a significant role in both disease development and progression. Oxidative stress refers to cellular damage caused by reactive oxygen intermediates (ROI), which are byproducts of oxygen metabolism.4

A key molecular component of lipofuscin is A2E––a phototoxic byproduct of the visual cycle that likely is an underlying cause of dry macular degeneration.6 When A2E is exposed to light, the RPE cells experience further damage, including free radical generation, drusen formation and activation of several complement factors associated with AMD development, such as complement factor H (CFH) and complement factor B. Fortunately, A2E can be detected with fundus autofluorescence (FAF). So, clinicians with access to FAF imaging devices may be able to identify patients at an increased risk for AMD before drusen formation is evident on clinical examination.7

Take note that patients with progressive dry AMD are at an elevated risk for geographic atrophy (GA) formation (figure 2). The build-up of lipofuscin causes RPE stretching and subsequent pigment release. Over time, further RPE cell degeneration and proliferation clinically manifest as areas of pigmentary change located near or around existing drusen. Eventually, the drusen and overlying pigment epithelium disappear, leaving a patch of geographic atrophy.

Genetic Influences on AMD
Most common medical conditions—such as hypertension, type 2 diabetes and breast cancer—are complex, multifactorial diseases that result secondary to a combination of genetic components and environmental factors.8 The same can be said of age-related macular degeneration. Within the last decade, researchers have uncovered several gene-gene and gene-environment interactions that directly influence the pathogenesis, progression rate and potential severity of age-related macular degeneration.8,9

The clinical presentation of AMD is highly variable. For example, although drusen formation and RPE atrophy are considered hallmarks of the disease, their presence alone is not a reliable prognostic indicator.9 Large and soft drusen are known to be strong risk factors for the development of more advanced forms of AMD, including central GA and secondary choroidal neovascularization.9 Although these clinical findings are associated with a greater overall “risk,” not all patients experience comparable rates of disease development and progression. This is where genetic testing is becoming an invaluable source of diagnostic and prognostic information––it can potentially identify specific individuals who truly are at the highest risk for severe visual compromise.

Mutations of the CFH and ARMS2 genes have been definitively associated with an elevated risk of AMD development and progression.8 Further, several other genes, such as complement factors B, C2 and C3, could potentially be linked to macular degeneration.8 Fortunately, clinicians are now able to detect the presence of these gene variations via genetic testing.
Currently, there are two commercially available tests for AMD––Macula Risk PGx (ArcticDx) and RetnaGene (Sequenom Laboratories/Nicox). Both testing kits require the clinician to capture an in-office DNA sample via buccal swab.

Then, the sample is sent to a laboratory for analysis. Finally, the results are sent back to the ordering clinician in two to three weeks. The testing data can be instrumental in both patient education and risk assessment.

Dry AMD Therapies on the Horizon
Anti-VEGF therapies, effective though they may be, intervene late in the course of AMD development and are fraught with limitations (e.g., infection risk, high cost and the need for lifelong, ongoing therapy to maintain visual acuity gains).

Far better would be therapies that intervene upstream in the pathophysiology of AMD, before neovascular membrane formation. Below are snapshots of some of the most promising agents under study. 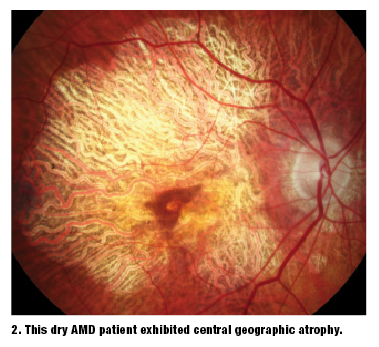 Visual Cycle Modulation
The process of regenerating 11-cis-retinol during the visual cycle produces toxic byproducts, including A2E.7 As previously mentioned, when A2E is exposed to light, it generates phototoxic compounds that damage the RPE cell membrane, inhibit proper RPE lysosome activity, and promote the development of early AMD.

• Emixustat (formerly ACU-4429) is intended to modulate visual cycle overactivity in patients with degenerative retinal diseases by decreasing production of the toxic byproducts (including A2E) that promote early AMD development. Developed by Acucela, Emixustat is a once-daily oral tablet intended to treat clinical symptoms associated with dry AMD. Currently, the drug is in Phase IIb/III testing for the treatment of dry AMD and geographic atrophy.10

Neuroprotection
Photoreceptor death occurs when the cells are separated from the underlying RPE. The underlying cause of photoreceptor cell death secondary to retinal disease is complex; however, there are two widely cited processes: apoptosis and necrosis.11 Investigations of neuroprotective agents have not been fruitful to date, and current research suggests that the failure is due to a concentration on monotherapy––when, in fact, a multidrug approach likely is necessary.11

There are several neuroprotective therapeutic agents in clinical trials; however, the most promising agents include:

• Renexus (formerly NT-501), an intraocular implant developed by Neurotech, recently completed Phase II testing for the treatment of geographic atrophy secondary to dry AMD progression.12 The delivery module contains genetically modified cells that have been engineered to secrete ciliary neurotrophic factor and inhibit photoreceptor apoptosis. It is worth noting that Renexus currently is being evaluated for the treatment of several other visually devastating conditions, including retinitis pigmentosa, macular telangiectasia and achromatopsia.

• AL-8309B (tandospirone, Alcon) is a selective serotonin 1A agonist that has demonstrated neuroprotive effects in animal testing. Studies have shown that tandospirone may protect both RPE and photoreceptors cells from severe photo-oxidative stress.14 A Phase III clinical trial, the Geographic Atrophy Treatment Evaluation (GATE), completed recruitment in 2013––although, results have not yet been made public.

Complement Inhibition
There is substantial published evidence of an association between AMD and a multitude of key proteins in the complement cascade. For example, patients with one specific variation of the CFH gene are nearly five times more likely to develop AMD than those without the mutation.15
Emerging complement inhibitors are promising and may play a role in both the prevention and management of AMD in the near future. Currently, several agents in development target various components of the complement cascade. One such drug is being tested off-label for the treatment of dry AMD:

•  Eculizumab (Soliris, Alexion Pharmaceuticals) is the only FDA-approved monoclonal antibody (against complement C5) that targets the complement system. (The drug currently is indicated for the treatment of a rare disease called paroxysmal nocturnal hemoglobinuria, and is dosed intravenously at 900mg every two weeks.15)

The COMPLETE (Complement Inhibition of Systemic Eculizumab for the Treatment of Non-Exudative Age-Related Macular Degeneration) study at Bascom Palmer Eye Institute in Miami was the first trial designed to evaluate the clinical efficacy of systemic complement inhibition for the treatment of dry AMD.15 The COMPLETE researchers enrolled 30 dry AMD patients, of which 20 received oral eculizumab. Unfortunately, those treated with eculizumab did not exhibit fewer drusen or a lower incidence of GA than patients in the control group. However, none of the patients in the treatment group progressed to wet AMD during the 12-month trial period, compared to 20% of controls.15

The researchers concluded that systemic complement inhibition may not be a successful strategy for slowing short-term GA progression. However, they suggested that intravitreal eculizumab administration may yield more promising results.15

As an aside, an ongoing Phase II trial currently is evaluating the effect of intravenous eculizumab on dry AMD and GA progression.16,17

Inflammation Suppression
It is well known that many retinal conditions are inflammatory in nature, including macular degeneration. Because corticosteroids are widely used in the management of ocular inflammation, intravitreal steroidal treatment likely holds great promise in curtailing dry AMD progression.

•  Iluvien (Alimera Sciences) is a sustained-release intravitreal implant that contains 180ug flucinolone acetonide. The device is implanted into the vitreous cavity via a 25-gauge intravitreal injector. Flucinolone suppresses VEGF, and chronic intravitreal infusion has been shown to preserve retinal structure and function.18 Iluvien currently is being evaluated for the treatment of dry AMD and GA in a Phase III study, and final data collection is anticipated in December 2014.

We have recently entered into an era of amazing biotechnology––one which will see the development and expansion of individualized medicine. In the short-term, optometrists will make the largest contribution via genetic screening for retinal disease. In not-too-distant future, however, ODs likely will become more directly involved in the therapeutic management of certain retinal diseases––particularly if an oral or topical medication secures FDA approval for the treatment of dry AMD.

Dr. Haynie is the executive clinical director at Retina & Macula Specialists, with office locations in Tacoma, Renton, Olympia and Kennewick, Wash., and is a member of Thrombogenics’ advisory board. He has no direct financial interests in any of the products mentioned.