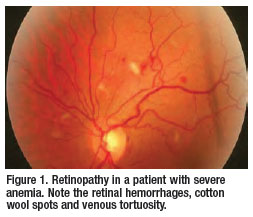 Retinopathy in patients with anemia is well documented. Common findings include hemorrhages that can present at all levels of the retina and choroid, Roth’s spots, exudates, cotton wool spots, retinal edema and venous tortuosity (Figure 1). Roth’s spots or white centered hemorrhages are typically associated with bacterial endocarditis, however the association is not exclusive, since they occur in diverse conditions including anemia. The white center could represent focal ischemia, inflammatory infiltrates, infectious organisms, fibrin and platelets, or an accumulation of neoplastic cells.2 The exact pathophysiology of anemic retinopathy is not completely understood. However, it seems to be related to retinal hypoxia, venous stasis, angiospasm and increased capillary permeability.3 Anemic retinopathy is most likely to occur in patients with severe anemia or when thrombocytopenia, a disorder of low platelets, is coexistant.4 The ocular changes found in anemic retinopathy are nonspecific and may closely resemble diabetic or hypertensive retinopathy. 5

Anemic retinopathy may also be a secondary manifestation of other systemic diseases such as cancer, infection or autoimmune disorders. Therefore, in addition to ordering a complete blood count (CBC w/differential), other appropriate medical testing may be necessary. In regards to the management, anemic retinopathy is reversible with correction of the anemia.

The sickle cell hemoglobinopathies are an inherited group of disorders that are due to a structurally abnormal beta hemoglobin chain subunit. The result is formation of crescent-like, or sickle shaped, red blood cells in response to decreased oxygen concentration or other physiological stresses. Sickle cell disease is one of the most prevalent genetic disorders in the United States and it predominately affects individuals of African descent and Mediterranean ancestry. Approximately 10% to 14 % of North American blacks are affected with one of the four known variants of sickle cell.6,7

The ocular complications of sickle cell disease are caused by microvascular occlusion secondary to the sickling of red blood cells. Retinal hypoxia, ischemia, infarction, neovascularization, and fibrovascularization may result from the microvascular occlusion.9 The retinopathy can be divided into non-proliferative and prolifertive changes (Table 1). Although neovascularization may be seen at the optic disc and the macula, proliferative sickle retinopathy is primarily a peripheral retinal disease that can lead to severe vision loss. Proliferative retinopathy is more characteristic of patients with SC and SB thalassemia disease than the more severe systemic form of sickle cell anemia.10

Patients with non-proliferative retinopathy should be followed periodically according to the level of involvement. For proliferative retinopathy, the aim is to prevent ischemic complications, particularly vitreous hemorrhages and retinal detachments. Treatment options include the use of diathermy, cryotherapy, and laser photocoagulation.13 Recent studies have investigated the role of pigment epithelium-derived factor (PEDF) and vascular endothelial growth factor (VEGF) in the progression of neovascularization. Siqueira and associates demonstrated retinal neovascularization regression with intravitreal Avastin (bevacizumab, Genentech) injection.14 Additional studies are necessary however, to demonstrate the reliability of anti- VEGF use in the management of proliferative sickle cell retinopathy.

The ocular complications of leukemia may be due to a direct involvement by leukemic infiltrates or secondary to concomitant anemia or thrombocytopaenia. 17 Leukemic retinopathy is a common manifestation of leukemia and is found in both the acute and chronic forms. Features of leukemic retinopathy include multiple preretinal and intraretinal hemorrhages that are most commonly found in the posterior pole. Other features include Roth’s spots, cotton wool spots, exudates, retinal venous tortuosity, perivascular sheathing, and neovascularization. Roth’s spot hemorrhages may represent small areas of retinal leukemic infiltration or plateletfibrin deposits. Retinal lesions such as peripheral neovasularization or sea fans neovascularization (reminiscent of sickle cell retinopathy) may develop in patients with chronic leukemia and are thought to occur as a result of peripheral nonperfusion and ischemia from the hyperviscosity. 15 Serous retinal detachments and various other retinal anomalies have been reported, as well as pallor and swelling of the optic nerve, which indicate optic nerve infiltration.15

In pathological studies, the choroid is the most commonly affected ocular structure. Choroidal masses lead to a disruption of the retinal pigment epithelium which result from decreased blood flow to the choriocapillaris.16 In some cases a serous or exudative retinal detachment may ensue.

Leukemic retinopathy usually is not treated directly. Systemic treatment involves the use of chemotherapy, immunotherapy, and radiotherapy. Intraocular leukemic infiltrate is best treated with chemotherapy that is appropriate for the type and stage of leukemia. External-beam radiation may be applied to lesions of the optic nerve or orbit. The presence of leukemic infiltration is usually a poor prognostic indicator.18

Lymphomas are a diverse group of cancers of the lymphatic system that comprise 3% to 4% of cancers diagnosed annually.19 Hodgkin’s disease is the most common form of lymphoma; all other lymphomas are termed non-Hodgkin’s lymphomas. Hodgkin’s lymphoma follows a more predictable pattern of growth, and its spread is more limited than non-Hodgkin’s lymphomas. The characteristic pathologic abnormality is a polycellular infiltrate made up of giant (Reed-Sternberg) cells that are fibrotic and necrotic in nature. Orbital involvement is a rare complication of Hodgkin’s disease, whereas non- Hodgkin’s is the most common type of ocular lymphoma.

Ocular abnormalities associated with lymphoma have been divided anatomically into a vitreoretinal and uveal form. The vitreoretinal form is associated with primary central nervous system non- Hodgkin’s lymphoma (PCNSL) and is typically a large B-cell tumor. In contrast, the uveal form is associated with systemic non-Hodgkin’s lymphoma. Involvement of the uveal tract presents as a non-resolving uveitis, diffuse choroidal infitiltration, or exudative retinal detachment. The characteristic retinal finding is a low-lying, yellow-towhite mass deep to the sensory retina. They may even appear as single, multiple, confluent, or discrete punctate lesions that may involve all layers of the retina.20 Retinal phlebitis and the presence of cotton wool spots have been reported as initial clinical findings in Hodgkin’s disease.

Treatment options for lymphoma include observation, involved-field radiation, subtotal lymphoid radiation, chemotherapy with or without radiation, and bone marrow transplant. Newer biologic therapies are also being investigated for the treatment of lymphoma.

Hematological disorders affect millions of Americans and represent a major public health concern due to the potential for significant morbidity and mortality. The retinal findings associated with the various hematological disorders necessitate an immediate comprehensive medical evaluation. The optometric physician may play a crucial role in the diagnosis and management of these disorders.