When it comes to instrument purchases, the patient comes first. Thats according to surveys by Review of Optometry and personal interviews in which O.D.s told us improved patient care is at the top of the list when they decide which instrument to buy next.

This is a constantly changing profession, advancing in both diagnostic modalities and treatment options far beyond what I have seen in 21 years of practice, says optometrist James L. Fanelli, of Wilmington, N.C. Along with new diagnostic and treatment modalities comes the responsibility to provide the appropriate care at the primary-care level.

However, Dr. Fanelli and his colleagues say the final decision to buy an instrument is rarely that simple.

I would call it a three-step process, says optometrist Robert Layman, of Toledo, Ohio, and Lambertville, Mich. One, will [the instrument] bring value to the patient, providing something they cant get now? Two, can the practice afford to offer it? How will the revenue underwrite the cost? Three, how easily can the staff understand the value of the instrument and explain it to patients?

Indeed, the O.D.s we talked with indicate that the purchase of new or updated instruments is more of a continuous improvement process than an occasional investment.

Of more than 600 O.D.s who responded to a Review of Optometry Live Poll in early July, two-thirds said that improved patient care is the single reason that most often motivates them to select a new or upgraded instrument. Another 15% cited the instruments potential to generate revenue as the most important reason. Improved technology and better efficiency tied for third (7% each), and 5% of respondents cited affordable price. 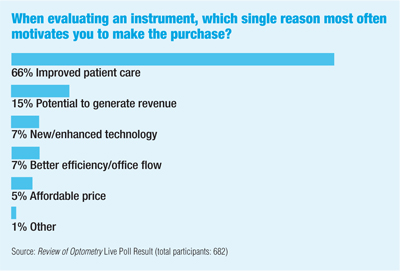 The purchases benefited their practices, a second Live Poll suggests. Nearly three out of four respondents said instrument purchases in the past three years have increased practice revenue somewhat or dramatically. Another 23% reported no effect on revenues. Only 3% of the respondents said their revenues decreased. 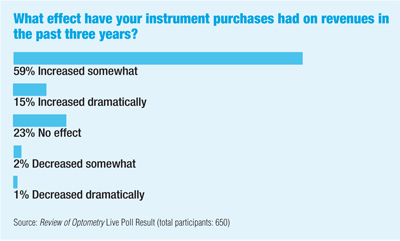 I cant say any instrument purchase has not been worth it, says Robert Brooks, O.D., of Greenup, Ky. I am such an analytical person; I always put a pencil to the purchase decision. A lot of O.D.s look at equipment as an expense, but I look at it as an investment that makes money for you. An expense comes out of your pocket. If it makes money for you, its an asset.

Optometrists who responded to two surveys conducted by Review of Optometry in 2004 (1,000 surveys were sent in both instances, with response rates of 26.5% and 19.9%) were continuously assessing new technology and planning for when to bring it into their practices. Specifically:

Some 42% had an annual budget of $5,000 or higher for purchasing diagnostic equipment.

Nearly 37% of O.D.s surveyed own a corneal topographer. Most have trained employees perform the test on refractive surgery candidates, contact lens wearers and patients who have corneal disorders. Of those who did not own a topographer, about 20% planned to buy one.

About half the respondents said they own a pachymeter. Among those who did not, 64% planned to purchase one in 2005.

Most O.D.s surveyed have fundus cameras. However, 54% purchased them in 1999 or earlier. Only 33% said their camera is connected to a computerized digital-capture system.

Some 45% of respondents bought their automated perimeters in 1999 or earlier. Only 9% said their perimeter is linked to a computerized patient records system.

Some 39% reported having autorefractors of a similar age.

Five out of 10 offices reported having a new computer system (two years or less). But, only 8% of the respondents have gone paperless, and only 5% planned on doing so within the next year. However, 86% of respondents said they submit insurance claims electronically.

Some O.D.s with whom we spoke expressed interest in more advanced diagnostic instruments as well as technology that improves patient education and differentiates their practices from others.

For example, William Jenkins, O.D., of Walhalla, S.C., recently bought an endothelial cell camera, an investment of $25,000. I noticed I had a number of patients presenting with Fuchs [endothelial] dystrophy, he says. I also have some contact lens patients who cannot be corrected to 20/20, and I suspect something is going on cellularly. I felt I needed a better handle on what was going on in the cornea at the cellular level.

Dr. Jenkins considered both the number of patients in his practice who have Fuchs and the number of contact lens wearers he suspects have corneal distortion to estimate his current use for the instrument. He also factored in insurance reimbursement rates. I could see that in a lively practice, this instrument is likely to generate about $85,000 in revenue, he says.

Another advantage: patient education. I could just talk to the patient about polymorphism of the cells in the endothelial layer of the cornea, Dr. Jenkins says. But, if I can show it to the patient by comparing a normal eye with the patients eye, it will drive home the issues.

To David Masihdas, O.D., of Salt Lake City, it made sense to invest in optical coherence tomography (Carl Zeiss Meditec), or OCT, given that 80% of his cases involve medical eye care. I see a lot of diabetic, glaucoma and geriatric patients, he says. If Im going to provide better care for these patients, I need to provide care above and beyond the average, and Im talking about ophthalmology as well as optometry. After reviewing the number of cases I had, I found more than the number required to support the investment, he says.

Whats important, these doctors say, is to analyze the decision in relation to specific practice needs. Lets face it; there is an incredible amount of equipment out there, and you cant have it all, Dr. Fanelli says. You need to tailor your equipment purchases to mirror the type of practice you have.

In other words, he says, a large contact lens and refractive surgery practice would require a corneal topographer, slit lamp imaging system and pachymeter. If you refer out glaucoma patients, its less likely you would need retinal tomography.

My practice, on the other hand, would be more interested in HRT III [Heidelberg Retina Tomograph, Heidelberg Engineering], OCT and optic nerve/retina-related instrumentation, adds Dr. Fanelli, who writes Review of Optometrys Glaucoma Grand Rounds column. If you see a bit of everything, you need to be selective in what instruments you purchase.

Given the size of many instrument and equipment investments, you shouldnt buy anything unless it will make money for the practice, adds Travis Adlington, O.D., of Reno, Nev. (For more advice from Dr. Adlington about equipment purchases, see Will This Instrument Pay for Itself? in this issue.)

Disease diagnosis, however, is just one reason O.D.s cite for their instrument purchases. Tommy Lim, O.D., of San Jose, Calif., recently invested a combined $34,000 in a new digital fundus camera and a compact automated perimeter, but he is just as excited about the $6,000 investment he made in patient education technology. Dr. Lim also upgraded to a 40-inch television in the reception area, where he plans to show customized patient education DVDs.

In optometry, for us to prosper, we must be cutting edge in all aspects of patient care, he says. But, we must also be proficient in educating the patient about the care he receives.

I would recommend EMR as a first place to spend money, he says. The ROI [return on investment] in terms of staffing and manpower will more than pay for itself. Youll save space, time and effort by going and getting one.

Optometrist Brian Chou, of San Diego, Calif., says his five-doctor office recently invested in a new computer system and EMR. I foresee lots of benefits for our practice with EMR, he says.

These benefits, he believes, include more accurate prescriptions due to reduced misinterpretation of handwriting, easier ophthalmic order tracking, no double entry of vision benefit submissions when billing Vision Service Plan, more space in the file room and easier monitoring of vital practice statistics.

Also, since my office routinely administers clinical studies for the vision-correction industry, I foresee EMR assisting in the identification of potential subjects that fit specific enrollment criteria, Dr. Chou says.

Dr. Brooks says he considers improvements in office efficiency as important as bringing in additional revenue. He says he learned this a few years back, when, as the new president of the Kentucky Optometric Association, he bought the Epic autorefraction system (Marco) to condense his patient-care schedule. Even with his KOA obligations that year, he had his best year financially.

If I can improve efficiency, it will pay for itself, he says. Some things I do to reduce stress. If we can stay on schedule better, my life is better than if Im running 30 minutes behind all day. I look at quality of life as well as income/revenue. That can make it worthwhile to purchase [a new instrument].