This years SECO 2007 meeting dropped the 2 and adopted a 007 theme. As the song goes, nobody does it better than that famous superspy. Much the same could be said of SECO in terms of education, exhibits and social events. Nearly 8,000 attendees gathered in in late February for the meeting. 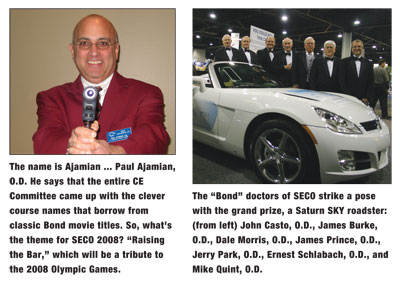 The Education Destination
SECO 2007 featured more than 385 hours of continuing education, including a free daylong Student Education Program to help optometry students get a leg up on their future.

Education kicked off at the Special Session, where presenters made the case that The Status Quo Is Not Enough. This session analyzed four different aspects of the changing profession.

The Through the Eyes of a Woman track, sponsored in part by Review of Optometry, included three courses that discussed professional aspects for women optometrists as well as eye care for female patients.

In You Only Bill Once, supported in part by VSP, John McGreal, Jr., O.D., noted that some O.D.s mistakenly believe there is a trick to improving receivables from insurers. The trick? Correct coding requires adequate documentation of services. Correct coding improves revenue, Dr. McGreal said. Just by coding the way office visits and eye care services should be coded, your revenue will increase.

SECO 2007 also offered 165 courses for allied ophthalmic professionals (AOPs). Certainly, SECO is the only venue that offers courses to all the major AOP organizations and affords all attendees a much wider range of courses than any one discipline could offer, says Thomas E. Griffith, O.D., chairman of the SECO AOP Education Program.

Another unique opportunity: AOPs could attend courses alongside O.D.s in the SECO Joint Programs. These tracks covered topics important to optometric staff, managers and optometrists, reflecting the expanding duties of all practice personnel.

But as an education destination, SECO isnt found only in February in . SECO offers online CE courses that can be accessed any time. Courses offered at www.secointernational.com include recorded COPE-approved lectures, ePosters and Digital Grand Rounds.Optometrys Marketplace
This years exhibit hallOptometrys Marketplacefeatured more than 240 diverse exhibitors, including high-end fashion eyewear and new pharmaceutical products. SECO plans to expand the exhibit hall space for 2008 to accommodate additional vendors.

New this year: an eyewear pavilion called The View, which showcased some of the worlds most innovative and fashionable frame styles.

Attendees also enjoyed time to network and visit with old friends at social events such as the Shaken Not Stirred opening reception, the Presidents Reception, the Student Party, alumni receptions, The Party on and the EyeSpy party finale.

All in all, SECO 2007 was a prime example of why O.D.s attend SECO. Its a combination of several thingsthe education, the exhibit hall, seeing old friends and classmates, said attendee Roger Ray Loose, O.D., of Wiggins, Its why I come to SECO each year.