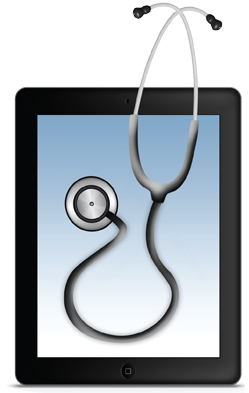 Just as optometrist John Warren and his family had settled into their front-row seats at the Kennedy Center in Washington, DC, he received a phone call from a frantic patient back in Racine, Wis., with a nasty eyelid infection. With just 15 minutes to go before the curtains opened for Rumpelstiltskin, he got the details from the patient and logged onto his e-prescribing system from his iPhone.

As the lights began to dim, the eRx was on its way to the patient’s local pharmacy. “It’s just amazing. E-prescribing allows me to meet my patients’ needs—even when I’m hundreds of miles away,” says Dr. Warren, who made the switch to eRx about three years ago. “Coming from the old paper Rx pad, it certainly saves you some hassles.”

With each year that passes, more providers are putting down their pen and pad in favor of the click of a button. More than 380,000 office-based US physicians were e-prescribing by the end of 2012, and nearly half (44%) of all prescriptions dispensed last year were routed electronically, according to Surescripts, the nation’s largest e-prescribing network.1

“It’s a sign of the times and the general shift toward technology and mobile devices/communications,” says Carmen Catizone, MS, RPh, DPh, executive director of the National Association of Boards of Pharmacy. “It seems to be happening across the board in health care, as we trend towards electronic medical records and identify ways to reduce prescription errors caused by illegible handwriting and miscommunications.”

Less Time in the Pharmacy Line
In addition to cutting down on prescription errors, e-prescribing saves time for many ODs and improves convenience for both them and their patients. “From a patient perspective, they don’t have to go to a pharmacy, wait for the prescription to be filled, and then pick it up,” says Mile Brujic, OD, a partner of Premier Vision Group, a four-location optometric practice in northwest Ohio. “This whole process starts before they even step out of our office.”

Make sure that your patient has realistic expectations, though. As Dr. Brujic’s wife, a pharmacist, likes to remind him, the Rx still goes into a queue at the pharmacy the same way a paper script would. “At this point I educate people on it, just because I sent it through doesn’t mean it will get filled immediately,” he laughs. But it’s still likely to be much faster.

With 788 million prescriptions routed electronically last year—a 38% increase from 570 million in 2011, more patients are enjoying the benefits of e-prescribing.1 It means less paper for them to tote around, including discount cards from manufacturers. “Right now, a lot of companies have their drug reps hand you some coupons to give to your patients to cap their copay or out-of-pocket expense,” Dr. Warren says. But how often do you or the patient forget to grab that little sheet of paper? Some manufacturers have those discounts set up to send electronically when a doctor prescribes one of the applicable drugs. When the patient gets to the pharmacy, the discount has already been applied.

You’ll spend a lot less time on the phone with the pharmacy, too. “Undoubtedly it improves accuracy for me and saves follow-up calls—is that Tobrex or Tobradex?” Dr. Warren says. “There’s a lot less confusion about the drugs and the dosing.” And instead of having to field faxes or phone calls for prescription refills, you’ll receive those electronically as well, which allows you to respond more quickly and easily monitor the status. 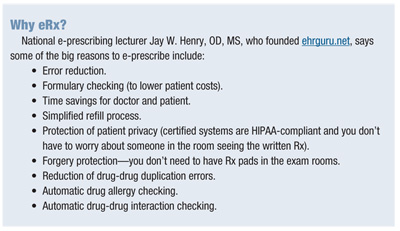 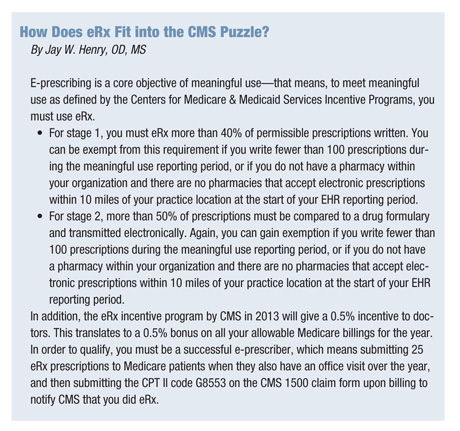 Watch Where You’re Clicking
While this convenience has significant benefits, it also can be easy to make a mistake. With 93% of community pharmacies able to accept e-prescribing, the jam-packed, drop-down menu of pharmacies can blur together.1 Dr. Brujic recalls clicking on Walgreens instead of Walmart a couple times. “Now the patient is at Walmart asking about the prescription, and Walgreens is calling our office saying we have this prescription from your office and no information on this patient,” he says. “It’s an easy fix, just a matter of rerouting the eRx, but it’s a little inconvenient for the patient.”

But, sometimes drop-down mishaps can have much more serious consequences. “The drop-down menus can limit choices available to the doctor and have been shown to result in prescribing errors from doctors selecting the wrong drug,” Dr. Catizone says. With such a quick and easy system, it’s important to take your time and make sure that click of a button is the right one.

As long as you’re vigilant, these limited choice may actually increase accuracy and decrease follow-up from the pharmacy. “[The system] keeps you from selecting drugs that just aren’t available in certain dosages,” Dr. Warren says. “If a drug only comes in 250mg tablets, it only lets you choose 250mg tablets from the drop-down menu.”

When you create a prescription in an eRx system, it automatically checks for known drug allergies and drug-to-drug interactions, and raises a red flag if you select a drug that could create a potential problem. “In primary eye care, there’s very little we’re going to give a patient that’s going to kill them if they’re taking something else,” Dr. Warren says. “If you’re an internist treating hypertension, that’s another story. So for me, the biggest benefit of e-prescribing is the formulary checking.”

In the old days, you might write a paper prescription, give it to the patient and then 20 minutes to two days later, you get a call from a patient saying, “I can’t afford a $150 drug.” Then you have to make multiple calls back and forth with the pharmacist, trying to find a suitable drug that is covered. Unfortunately, this scenario could play out quite a few times before you find a good fit—and by that point, everyone’s time and patience may be running out.

Today, with more optometrists e-prescribing, this type of situation is much less prevalent. “With eRx systems, at the point of creating the Rx, the system will tell you if the drug is on the formulary or not,” says Jay W. Henry, OD, MS, the first optometrist in the country to e-prescribe and a partner at Hermann & Henry Eyecare, in Pickerington, Ohio. “If it is not, it will automatically offer you other drug options in the same classification that are covered, allowing you to select a covered medication at that time, saving everyone time and money.”

On the other hand, if the more expensive drug is the best option, it allows you to talk with the patient and explain that the price tag may be a little higher but it’s the best option for their health. 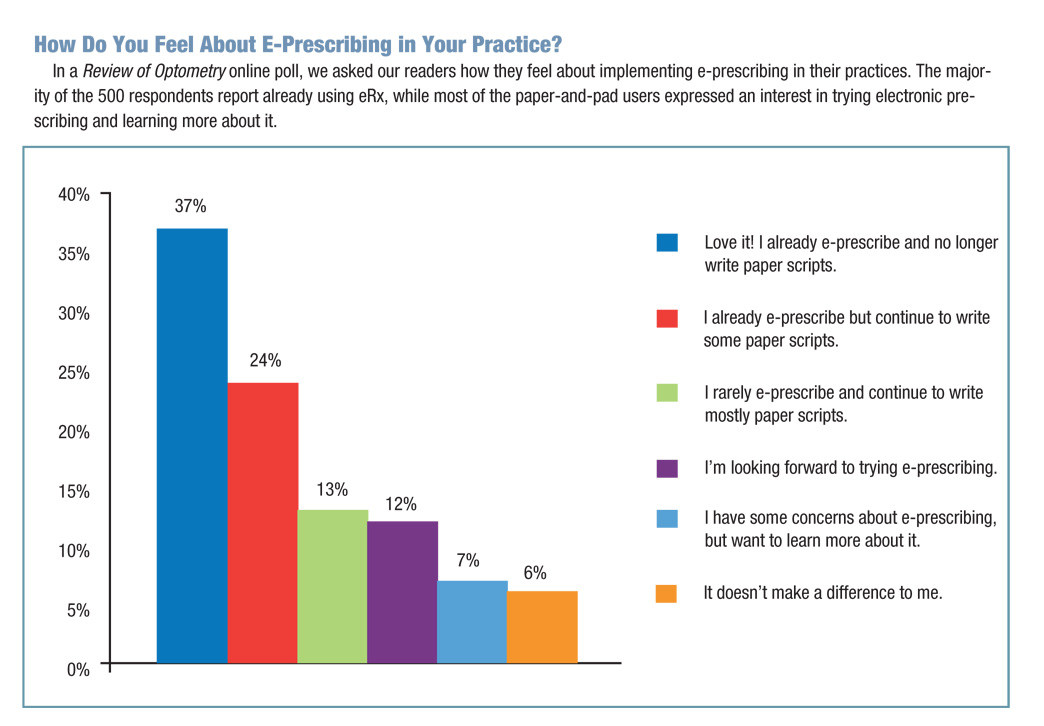 A Matter of Cost and Convenience
Like a lot of technology today, e-prescribing may come at a price—specifically, a price of about $600 to $650 per year for most EHR-integrated eRx systems. “I didn’t think it would be worth the price tag at first, but it saves me plenty of time in the exam room and improves the patient experience enough, that I consider it money well spent,” Dr. Warren says. “My average patient age is about 59 to 60, and over half of my visits are medically related––so, in my case, it’s really a no-brainer.”

But that’s not necessarily the case for every optometry practice. When deciding what type of eRx system, if any, is worth the investment for your office, look at your prescribing patterns. If, for example, you have a pediatric practice that does mostly vision therapy and writes one prescription a week, it’s probably not something that makes sense practically or financially.

If you want to dip your toe in the water, you might want to try a free standalone system online first. Usually you won’t a pay for these systems—but they will cost you some convenience. Before making the switch to EHR-based e-prescribing, Dr. Brujic’s practice used a free, online standalone program. “The e-prescribing was a separate island, and it was a little bit cumbersome to use,” he says. And because a standalone system wouldn’t automatically communicate with any of your other systems, you’ll need to re-enter all of the prescription information into your EHR or paper chart.

“Transitioning between the systems (with a standalone program) is a challenge and may rely on memory or the jotting of notes rather than having all of the needed information available for review when prescribing the appropriate medications,” Dr. Catizone says. “The integrated systems offer significant advantages and increased patient safety—besides the workflow considerations, there is the ability to consider all of the patient factors at the time of prescribing instead of closing one system and then accessing another system to e-prescribe.” It’s no surprise then that a whopping 87% of prescribers are e-prescribing using an EHR as opposed to a standalone system.1

With an integrated system—where an eRx module is built into an EHR—you typically pay an annual fee to use it, but that investment will likely save you some time and hassle. It saves a lot of data entry because you can just select eRx when you are in the patient’s encounter. It will already have your basic information and the patient’s, so you select a pharmacy and drug, then send it and sign off. “When you sign off, the integrated system will download the prescription you just wrote into your EHR, saving all the double entry and reducing errors,” Dr. Henry explains. “The process is significantly easier.”

So if e-prescribing works this well, why aren’t 100% of doctors using it? Well, they’re getting there—currently more than two out of three office-based physicians are e-prescribing, but there are still a few docs dragging their heels.1 “For some, the barrier to adoption is change. None of us like change, but once we get used to a new system and a new workflow, we are fine,” Dr. Henry says. “I have been e-prescribing for a long time now, and the process is so much easier for me than handwriting or calling a pharmacy. I can’t imagine doing it any other way.”