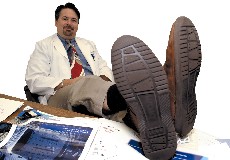 Let us speak of one of the most important elements of any successful optometric practice. No, not the computers. No, not the visual field analyzer. No, not the receptionist, nor the assistants, nor the optician, nordare I say it?the doctor. It is actually possible for the office to open and be at least somewhat active with NONE of these present, although the income may be a little better if the doctor is there. (Depends on the doctor. I know some colleagues who probably just get in the way.)

There is something vastly more important to a successful optometric practice than any of these. You can open without the doctor, but YOU MUST HAVE THE BATHROOM! Think your office is rough and ready? Spend a day without a bathroom available. The grandest office just isnt worth, well, crap without a crapper.

My first memory of an optometric bathroom was back at dear ol Pennsylvania College of Optometry. It was 1975, and I was a freshman. All the students thought the guy who taught Practice Management 101 was a nut. This doctor, who I assume was quite successful, started his course by showing us slide after slide of his new office. Actually, every slide for the first three days was a photo of his office bathroom. Some photos included a staff member, patient, or even the fine doctor himself smiling like the Mona Lisa while standing beside the new sink or toilet. Quite a sight.

Maybe he was a nut. But maybe not. Turns out that the bathroom is indeed the most important part of an office. Now the laugh is on us.

When I came into practice with Dr. Bodie in 1979, his office had two bathrooms. One, at the end of the hall, was tiny but operational. The other was more private and spacious, but it backed up and overflowed with sewage when it rained. Cant have everything, I guess. One day, while up to our ankles in you-know-what, we finally decided to have it capped.

This left us the small restroom at the end of the hall. It was fine, except that it stunk. Oh, and it didnt have a lock. That was about the time in my career that I became quite intimate with so many patients. You havent really examined patients until you walk in on em in the bathroom. Or, even better, vice versa

Are you the doctor?

Yes, pardon me if I dont stand up.

We all became very close.

When that fine facility finally failed us, we ran down the street to a little restaurant that had a decent, working bathroom. For some reason, this seemed to bug the restaurant owner. So, I finally had ours repaired. This took four days, as the plumber used a backhoe to dig up pipes right across the street. The good news is that the toilet did not stink during this repair. Cant say that about the plumber, though.

At one point in my career, I had eight employeesand one bathroom. This meant that my hallway often looked like the concession area of a football stadium at half time. Now, I have three employees and three bathrooms. One more (of each) and wed be humming, bub.

I have a cool bathroom in my private office. It has a shower. I need that shower and use it just as you would: for storing boxes of stuff. I have no clue whats in these boxes. Guess we must need this stuff because, well, we are storing it. Havent had a shower, though.

So, your toilet, doctor, is important to your success. My advice: Have a bunch of them around. The more, the merrier!