A 45-year-old Hispanic male was referred by his primary-care physician to rule out diabetic retinopathy. The patient reported a six-year history of non-insulin-dependent diabetes mellitus, for which he was taking glyburide.

His ocular history was significant for poor vision in his right eye for the past 20 years. He said that he was hit in that eye with a bale of paper and has experienced poor vision ever since. He reported good vision in his left eye. He does not wear any optical correction.

On examination, best-corrected visual acuity measured 20/200 in the right eye and 20/20 in the left. Extraocular motility testing was normal. Confrontation visual fields in the right eye were severely restricted, with finger counting vision only present inferiorly.

Confrontation fields in the left eye were full to careful finger counting.

The pupil exam revealed a strong afferent pupillary defect O.D. The anterior segment exam was unremarkable in both eyes. IOP measured 14mm Hg in both eyes. 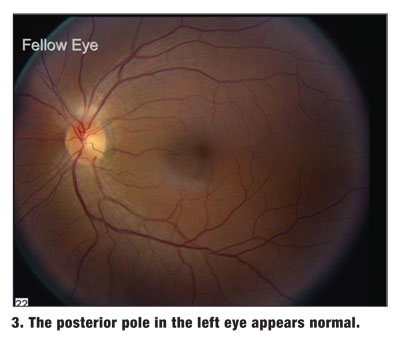 Dilated fundus exam of the right eye revealed the changes seen in figures 1 and 2. The left eye appeared normal (figure 3), but a peculiar finding is seen inferotemporally (figure 4). 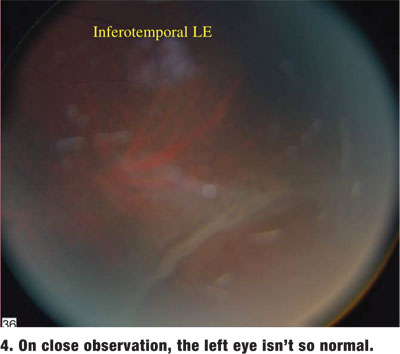 1. What do the fundus changes in the right eye represent?

2. What is the peripheral change in the left eye?

3. How should the right eye be managed?

4. How should the left eye be managed?

Our patient has a chronic retinal detachment that extends almost 270 degrees in the right eye. The retina was only attached superiorly, as seen in figure 1.

On clinical exam, the bullous retinal detachment was very obvious, especially inferiorly. It also extended superiorly, especially on the nasal side of the retina. The heavily pigmented demarcation lines along the leading edges tell us that the detachment is chronic.

Of particular interest is the macular region (figure 2), which was flat and without subretinal fluid. There is much retinal pigment epithelial scarring and pigment migration into the scarred retina as a result of having once had fluid. The fluid is long gone, but it left behind a scarred and atrophic retina.

Certainly, the retinal findings in the right eye were a surprise. Almost equally surprising were the changes seen inferotemporally in the left eye. Figure 4 shows a large retinal break with subretinal fluid along the posterior edge. What was unusual was that only the ora serrata, and not the retina, was present anterior to the break. In a horseshoe tear, or retinal hole, there is always retina surrounding the break, especially anteriorly. That was not the case in our patient.

Our patient has a retinal dialysis, which represents a separation, or disinsertion, of the retina from the ora serrata. The inferotemporal quadrant is the most common location. Seventy percent of cases are due to trauma.1 Nontraumatic dialysis can occur, but this condition is very rare.

Treatment options for retinal dialysis range from laser demarcation of the posterior edge to a segmental scleral buckling procedure. When clear signs of chronicity, such as pigmented demarcation lines, are present, close observation may be recommended.

After examining the patient and noting the retinal findings, we sought a more detailed case history. The patient spoke only Spanish, so we had a difficult time understanding what actually caused the trauma. Initially, the patient replied that a paper cut in his right eye caused the retinal detachment. Realizing that a paper cut probably would not have caused this much damage, we obtained a Spanish translator and learned that he used to work in a paper processing plant, where he was hit in the eye with a large bale of paper; this caused the retinal detachment.

So, how should we manage this patient? The right eye appears pretty stable. The detachment is well demarcated, and there is much scarring, especially in the macula. We believed that the visual potential in the right eye is very poor and probably would not improve beyond the current 20/200 level, even with treatment. So, we recommended observation for the right eye.

The bigger question: how to manage the left eye. Because the dialysis has been present for a while and appears stable, we chose to closely observe this eye as well. Also, he appears to be developing a pigment demarcation line along the posterior edge. The decision to treat could immediately change if the dialysis progresses to a detachment or if the patient becomes symptomatic.

We recommended protective eye wear and told the patient to return for follow-up in one month.