In clinical practice, we encounter a couple of health conditions with such regularity that we may not even think twice when we see the ocular manifestations of them: systemic hypertension and dyslipidemia.

It’s well known that hypertension (HTN) and dyslipidemia can lead to many different morbidities, including myocardial infarction, stroke and damage to various systemic organs (most notably the kidneys). Both of these conditions strain the cardiovascular system, which can cause vascular changes that we see frequently in the eye care setting. (Bear in mind that other conditions, namely diabetes mellitus, can have similar retinal changes and should be considered as a differential.)

Fortunately, we can often observe “warning signs” in and around the eyes.

• Hypertension. High blood pressure, or hypertension, is a very common condition that affects an estimated 31.9% of Americans over age 20, according to the Centers for Disease Control and Prevention (CDC).1

Blood pressure can be measured with an automated device or a traditional sphygmomanometer and stethoscope. The American Heart Association recommends that blood pressure should be performed on all patients over the age of 20 at every routine exam and every two years regardless of any previous hypertension diagnosis.2 Two or more measurements of high blood pressure indicate a diagnosis of HTN.3

The exception is when malignant hypertension (hypertensive emergency) is present, which is considered a medical emergency and occurs when the systolic reading exceeds 180mm Hg and/or the diastolic number exceeds 110mm Hg.4

HTN is a major factor in cardiovascular disease because it puts added strain on the heart and vasculature. It also is linked to myocardial infarctions (MI) and cerebrovascular accidents (CVA), or strokes. Further, the stress caused by HTN on the various organs can result in significant damage and even failure. Renal failure is a serious consequence of high blood pressure––especially in the hypertensive emergency phase.

Cholesterol is measured by routine fasting blood laboratory analysis. The two most worrisome measures of hyperlipidemia are low-density lipoprotein (LDL) and triglycerides.

Elevated triglyceride levels also can increase the viscosity of the blood. This being the case, triglycerides are often included in the lipid panel for bloodwork and a value of 150mg/dL or less is normal. 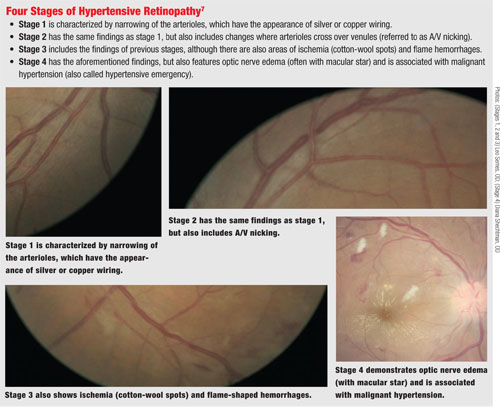 Hypertension and the Eye
We know that hypertensive changes can affect the retina, but let’s first discuss how it impacts the choroid.

Because the choroidal vasculature does not have the same autoregulation as the retinal vessels, the increase in blood pressure can cause ischemia. This is due to the arterioles in the choroid constricting, resulting in damage to choriocapillaris and the retinal pigment epithelium (RPE), which appear as white areas on the retina (usually in the posterior pole). This causes the release of exudates into the subretinal space, leading to RPE detachment. In these situations, fluorescein shows areas of non-perfusion. In cases of chronic hypertensive damage, Elschnig’s spots may appear as RPE hypertrophy with surrounding atrophy.6

If there is continued hypertensive strain on the vasculature, there can be an eventual loss of autoregulation, resulting in damage to the arteriole endothelial cells and the leakage of plasma and blood contents from the vessels––including exudates. This is the point in which flame-shaped hemorrhages and ischemia are noted on funduscopy. Eventually, optic nerve and retinal nerve fiber layer damage can occur. (This can occur with an acute increase in blood pressure, as in malignant hypertension, or continued chronic HTN.6) 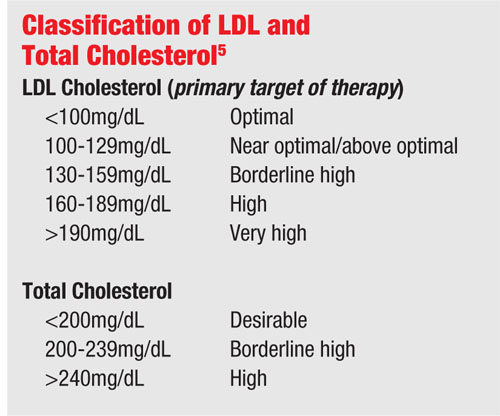 In the malignant hypertensive state, nerve edema and macular exudates in a stellate pattern may be present.

To help distinguish the level of change in the retina due to HTN, we use the Keith-Wagener-Barker classification system for HTN retinopathy.6 The concern with retinal changes from hypertension is that the strain may result in vessel damage. This is observable in a pending vein occlusion where it can be seen that the arteriole/venous interface causes the flow of the venous blood to be impeded, resulting in a rupture of the vessel and, depending on the location, may result in a branch or central vein occlusion.

The issue with these occlusions is the potential for an ischemic event, yielding the release of vascular endothelial growth factor (VEGF). If left untreated, VEGF may precipitate neovascularization that can cause other vision-threatening conditions, such as macular edema, neovascular glaucoma and fibrosis leading to retinal detachments. When patients present with retinopathy, be sure to refer them to their primary care providers, as they may be at risk for a cardiovascular event.
Hypertensive patients often present with no visual or ocular symptoms. However, some patients do present to eye care providers with vague complaints of headaches, vertigo, lightheadedness, fatigue, intermittent vision changes or blurred vision.

Systemically, there also may be an indication of blood in the urine, dyspnea and chest pain. Even though it is more frequently reported by those who use anticoagulation medications, some patients present with subconjunctival hemorrhages.8 As health care providers, we must be vigilant to understand that the ocular signs and visual symptoms may be caused by systemic conditions.

This is important when looking at the morbidity and mortality of HTN. For instance, the three-year survival rate for patients with grade 1 hypertensive retinopathy is 70%, but decreases to just 6% in those with grade 4.9

Also, in a 13-year study, the rate of CVA in patients who had any stage of hypertensive retinopathy more than doubled in those with moderate to severe retinopathy. This notable increase in risk correlates directly with higher levels of morbidity, and illustrates the great importance in identifying the various levels of retinopathy to better assess the patient’s level of risk.10

In addition to the visible changes that clinicians can observe, there are also changes seen on a histologic level. Recent research shows that amyloid beta deposits contribute to the development of macular degeneration. This is important because increased cholesterol has been linked (in animal models) to a greater amount of amyloid beta produced by retinal pigment epithelium cells.11 In rats that were genetically engineered to have hypercholesterol, researchers found a decrease in retinal ganglion cells along with ischemia, subretinal accumulation of activated macrophages, low grade inflammation and macular edema.12

Dyslipidemia and the Eye
Dyslipidemia also causes adverse changes to the eye. Cholesterol emboli may be liberated from plaques within the internal carotid artery and relocate in the retinal arterioles. These emboli, called Hollenhorst plaques, may be associated with transient vision loss, or amarousis fugax. These plaques are an important finding because they are linked to a greater likelihood of morbidity and mortality, including transient ischemic attacks.9,13

Along with plaques being liberated from the internal carotid, there can also be lipid accumulation in the vessel causing a partial occlusion that can lead to retinal changes that may be seen clinically. This condition is called hypoperfusion retinopathy (or ocular ischemic syndrome) secondary to carotid occlusive disease, and can be accompanied by dot-and-blot hemorrhages in the mid-peripheral retina along with the possibility of neovascularization within the eye.

Treatment
Typically, the treatment for hypertensive retinopathy includes proper management of the underlying condition. So, referral to the patient’s primary care provider is warranted when retinopathy is present.

Pharmaceutical companies have also developed medications that combine classes into a single drug, such as Lotensin HCT (benazepril [ACE inhibitor] and hydrochlorothiazide [diuretic], Novartis). As with any medication, there are benefits and risks (which are outside the scope of this article)—though be sure to use topical beta blockers with caution when the patient is already taking them systemically (or on another blood pressure medication).

Also use caution in administering 10% phenylephrine in any patient with cardiovascular disease or elevated blood pressure, as phenylephrine has the potential for raising blood pressure.14 Upon the lowering of the blood pressure back to “normal” levels, there can be regression of the retinopathy in six to 12 months.9

If a patient presents with malignant hypertension with concomitant retinopathy, intravitreal bevacizumab (Avastin, Genetech/Roche) along with blood pressure treatment can help to reduce the retinopathy, most notably if there is macular edema.15

For dyslipidemia, the course of treatment is also to treat the underlying systemic issue. This is typically done by modifying the patient’s diet to reduce cholesterol intake along with exercise and lifestyle changes, such as smoking cessation.16 If this is unable to fully control the condition, medication is often prescribed, most commonly with statin drugs. There are also other medication classes such as bile acid resins, fibrates, niacin-based drugs and also newer agents that reduce cholesterol absorption in the intestines. Like hypertension meds, some drugs are combination medications of the various classes.
Recently, the American Heart Association and the American College of Cardiology jointly released updated guidelines to help clinicians better manage their overweight and obese patients and those at risk for CVD. Because there is an unquestionable link between obesity and heart disease, the organizations determined that obesity, like CVD, should be treated as a disease and managed by educating the patient to consume fewer calories than the body needs, exercise more and change unhealthy behaviors.

The new guidelines also determined that more patients can benefit from the use of statins. Previously, statins were to be considered if the patient’s risk of ischemic event was 20% over 10 years. The guidelines now specify that if that risk factor is lowered to 7.5% over 10 years, and also include women over 60 who smoke and African-American men over 50 with HTN, the levels of cardiovascular disease in America would greatly decrease.17-19

With the high prevalence of hypertension and dyslipidemia in the general population, we need to be diligent in the assessment of not only the vague complaints associated with these conditions, but also the signs that may accompany them. Because these systemic conditions have the potential to cause significant damage to not only the eyes but also to the kidneys, brain and heart, we need to be aware of the importance of proper referrals and monitoring.

After diagnosing ocular changes—and with a concerted effort among the patient’s primary care provider, fellow eye care providers and the patient—we can hopefully prevent not only the possible ocular problems from occurring, but also the potential of other organs from being affected beyond repair.