Myopia control has been growing in popularity over the last two decades worldwide. In 2002, only 10 randomized control trials were published.1 To date, there are now over 170 peer-reviewed articles on myopia control.1 The growing interest in this topic, more so in certain populations and countries around the world than others, likely reflects the increasing incidence and prevalence of myopia. In 2000, there were an estimated 1.406 billion people in the world with myopia.2 By 2050, predictions estimate that number will grow to 4.758 billion.2 With global numbers on the rise, the myopia epidemic is quickly increasing in severity.

Although global numbers are increasing overall, myopia disproportionately affects some ethnicities more than others. For example, the Multi-Ethnic Pediatric Eye Disease Study (MEPEDS) group showed small variations in myopia prevalence among preschool-aged children in the United States (1.2% non-Hispanic whites, 3.7% Hispanics, 3.98% Asians, 6.6% African Americans).3 In comparison, school-aged children in Hong Kong had a myopia prevalence of 18.3% in six-year-olds and 61.5% in 12-year-olds.4 Another paper illustrates that in east and southeast Asian countries, 80% to 90% of young adults are myopic.4 Even within the same country, differences exist in the prevalence of myopia between urban and rural settings.

There are many risk factors that affect the global trend of myopia, including high educational pressures and limited time outdoors.5 A recent cross-sectional study in China showed a myopic shift after home confinement due to COVID-19. The myopia prevalence increased 1.4-fold to three-fold in 2020 compared with the previous five years.6

Why should we be concerned about increasing levels of myopia? High myopia is associated with an increased risk of retinal detachment, cataract, glaucoma and myopic degeneration. Rhegmatogenous retinal detachment (RRD) results from axial elongation, vitreous liquefaction, posterior vitreous detachment and vitreoretinal degeneration, and affects 6.3 to 17.9 per 100,000 people.7 Independent of age, an eye with a spherical equivalent refractive error of -1.00D to -3.00D has a 4x increased risk of RRD compared with an emmetropic eye.7

An eye with a refractive error greater than -3.00D has a 10x increased risk.7 Patients with a longer axial length are more likely to have denser nuclear sclerosis and need cataract surgery.8 Myopia is associated with an increased prevalence of all forms of open-angle glaucoma and ocular hypertension.9 Myopic degeneration can lead to choroidal neovascularization and macular edema. Due to the increased risk of developing these sight-threatening conditions, researchers and clinicians alike have sought to more thoroughly understand myopia, including its process and progression.

Myopia is caused by a complex, multifactorial interplay between many genetic and environmental factors. The extent of the influence of genetics is not fully understood. Myopia is highly heritable and has a 60% to 80% chance of being passed down.10 Additionally, almost 200 genetic loci have been identified to date as causing refractive error and myopia.10 Despite the scientific discoveries and advances we have made in the area of myopia genetics, genetic epidemiology and epigenetics, there is still much more research and knowledge to be gained.

The Homeostasis of Eye Growth and the Question of Myopia and the IMI—Report on Experimental Models of Emmetropization and Myopia studies provide a comprehensive and exhaustive review of many key animal studies that have established how we currently understand how the eye develops.11,12 It is assumed, like many other organs in the human body, that the eye undergoes both visually guided and non–visually guided regulations regarding eye growth. The axial length of the eye changes by either increasing the rate of growth of the entire eye or remodeling the sclera at the posterior pole.13,14 Additionally, the retina pulls back within the eye through choroidal thinning.15

The second mechanism to induce myopia is through form deprivation. One study demonstrated that if only half of the visual field is occluded, myopia and axial elongation occur only in the hemiretinal area that is form-deprived.16 The same was true with full-field lenses.16 In addition, if diffusers or negative lenses cover half of the retina, only that half of the eye will become myopic and enlarged.17 Conversely, if positive lenses cover half of the retina, only that half will show inhibited eye growth.17 Even in eyes with a severed optic nerve or blocked action potential of the nerve, myopia can still be induced through form deprivation.18-20 These studies revealed that local ocular mechanisms can also be responsible for eye growth, rather than a neurological feedback loop involving the brain.

Peripheral defocus. The central 10° of our visual field contributes to 50% to 60% of the striate cortex.21 Researchers hypothesize whether the macula has more of an influence on the peripheral retina for eye growth. When the central retina was photoablated by a laser, and negative lenses were placed in front of the eye to induce hyperopic defocus, the magnitude of myopia produced in animal models was only slightly smaller in the foveal-ablated group compared with the control group.22 Therefore, the fovea is only responsible for a small amount of refractive development, and peripheral defocus likely plays a larger role.

Light levels. This factor plays an important part in emmetropization and decreasing the incidence of myopia. Outdoor light levels range from 30,000 lux to 130,000 lux, while indoor light levels are typically lower than 500 lux. Even on cloudy days, lux levels can measure between 10,000 and 20,000. Raising light levels in animal studies has been shown to increase retinal dopamine activity, which alters gene expression in the retina and reduces signals that produce axial elongation.23 Chicks that were raised in cages with 10,000 lux on a 12-hour light/12-hour dark cycle emmetropized normally.23 However, those raised in 500 lux became slightly myopic by 90 days (0.03D), and those raised in 50 lux became fully myopic by 90 days (-2.40D).23

Human studies support the findings in animal studies when it comes to sunlight exposure. One report studied Chinese children in grades one through 12. The study compared six schools that added a 40-minute period of outdoor activities with six schools that continued with a normal schedule. The three-year cumulative incidence of myopia was significantly different. The children who had more outdoor activity had an incidence of myopia of 30.4% compared with 39.5% for the children who did not.24 When it comes to light exposure and myopia progression, the data has not yet arrived at a clear consensus. 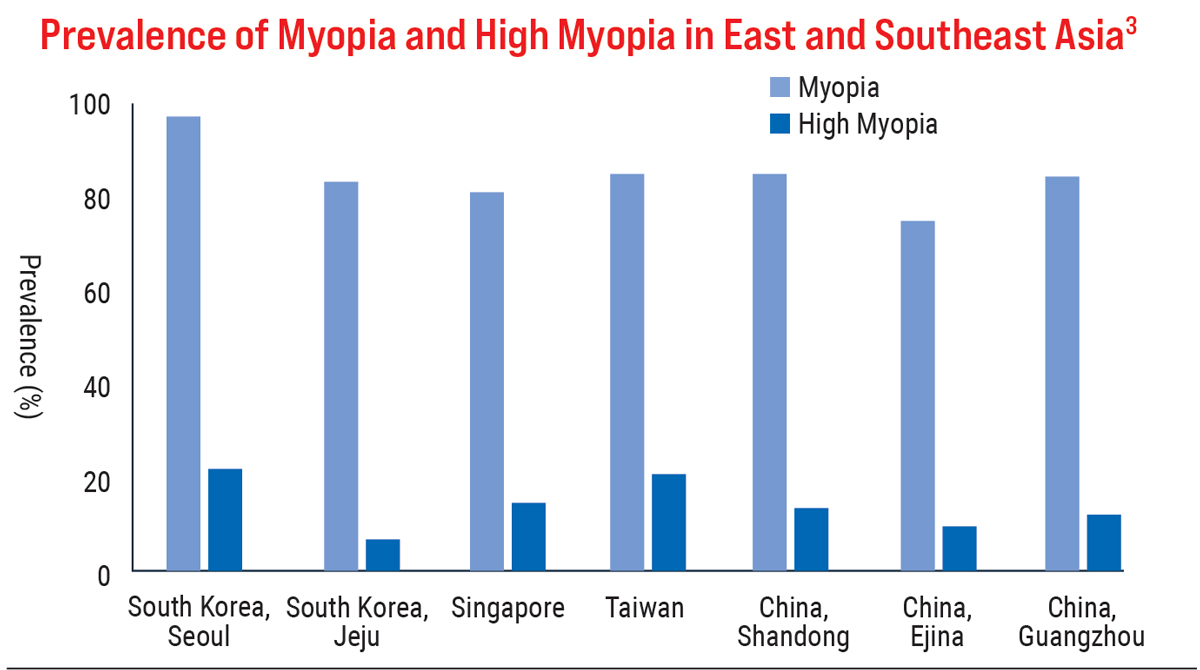 Atropine. These drops arguably have the most randomized control trial evidence for myopia control, namely from the landmark study Atropine in the Treatment of Myopia (ATOM).25,26 Initially, atropine was thought to slow the progression of myopia due to its cycloplegic effect on the smooth muscle fibers in the ciliary muscle. However, this theory no longer holds, as atropine is also capable of exhibiting myopia control effects on chicks. Atropine is a nonspecific muscarinic, cholinergic antagonist. Accommodation and light response in chicks are mediated by nicotinic receptors, rather than muscarinic receptors.12 Additionally, atropine may have a nonmuscarinic mode of action based on: “(1) the generally high dose of atropine required to prevent myopia in animal models, (2) its continued effect following ablation of cholinergic amacrine cells and (3) its effectiveness in inhibiting proteoglycan synthesis in isolated scleral cells.”12

In summary, atropine affects eye growth through cellular mechanisms that do not involve accommodation or ciliary muscle activity. The precise mechanism of action of muscarinic and nonmuscarinic pathways are not fully known or understood at this point.

The ATOM studies demonstrated that atropine eye drops reduce myopia progression and axial elongation in children in a dose-related way.25,26 Atropine drops have no serious adverse or systemic effects. High doses of atropine (1%), however, have been shown to cause pupil dilation, accommodation loss and near vision blur to the point where the treatment was not previously accepted in the US. Additionally, a significant rebound effect has been seen with higher concentrations. Low-dose atropine (0.01%) has the best therapeutic index, with clinically few, relatively insignificant amounts of pupil dilation and near vision and accommodation loss.

The vast difference in accommodation loss between the two studies at the same 0.01% atropine dose calls into question the efficacy of the atropine drops used in the LAMP study. In my opinion, I would start off with 0.01%, and if the patient demonstrates progression, increase dosage to 0.025% or 0.05%.27,28

The results of two OK meta-analyses confirm the effectiveness of this modality for myopia control.30,31 A recent study specifically compared multifocal OK with conventional OK and demonstrated that patients who were treated with the former modality showed significantly less axial length progression.32

These lenses create an optical defocus in the peripheral retina of the myopic patient. Multifocal contact lenses do so by additional correction incorporated into the lens, which is typically a center-distance design. OK lenses temporarily flatten the central cornea, allowing patients to see clearly during the day without correction. In addition, the peripheral cornea creates an optical defocus on the retina to control the patient’s myopia.

My myopia treatment strategy includes encouraging patients to spend more time outdoors (at least two hours each day), place limits on screen time and take frequent breaks from electronic screens. As far as atropine drops go, I start my patients on 0.01% atropine and increase to 0.025% or 0.05% if progression is demonstrated. My patients who are ready for contact lenses are fitted into soft multifocal contact lenses (center-distance design) or OK lenses depending on patient and parent preference. The type of soft multifocal contact lens used depends on the patient’s refractive error and whether or not they have astigmatism.

Treatment-specific tests and frequency of follow-ups are often determined by the modality of treatment. For example, a patient on atropine would have their pupil size, pupil function and accommodation evaluated; whereas, a patient using an OK lens would have corneal topography performed.

In my opinion, cycloplegic refraction and axial length measurements must be performed at least once a year regardless of treatment modality. Subjective dry refraction often yields varying results, but autorefraction is more repeatable and objective. It may be worthwhile to conduct both. Accommodation must be neutralized in order to obtain an accurate reading of the refractive error. The only way to truly quantify progression is to obtain objective cycloplegic refractions and axial length measurements. In the case of OK lenses, it is difficult to gauge myopia progression via refractive error. For these patients, axial length measurements are your best guide in determining rate of progression and effectiveness of treatment. In all cases, it is helpful to know a patient’s rate of progression before treatment so the patient can serve as their own control.

For treatment with contact lenses, most practitioners opt to continue wear until the patient is out of the myopia progression phase, which typically occurs during their late teens or early twenties. Reasons for early discontinuation include adverse ocular health events or the patient’s desire to stop treatment. The World Health Organization currently recommends atropine drops be used for two years. Personally, I keep my patients on atropine until they’re out of the myopia progression phase.

It is possible to augment contact lens treatment with low-dose atropine or vice-versa, as long as it is at the benefit of the patient. A recent study looking into the efficacy of combined OK lenses and 0.01% atropine found that axial length elongation was more prevalent in the OK group compared with the combination therapy group.33 The combination group was also 28% more effective in slowing myopia progression.

In the coming years, research and studies will lead to an increase in science- and evidence-based medicine that will serve as the guiding principles to help solidify clinical guidelines for myopia control. Above all, we should always act in the best interests of our patients, which means finding the most optimal treatment, while also ensuring health and safety.

Dr. Cheung received his optometry degree from UC Berkeley and completed his pediatric residency at Cincinnati Children's Hospital. He is on faculty at Duke University in the Department of Pediatric Ophthalmology. He is the director of community education and the director of the pediatric optometry residency at Duke. He has no financial interests to disclose.