A new school of optometry in California could open by 2009 if all goes as planned.

Officially, Western University of Health Sciences, in Pomona, Calif., will not confirm or deny plans to open a new optometry school. But, a 10-year strategic plan found on the universitys Web site predicts the opening of a new school of optometry by 2009. The university has also advertised for a dean.

The proposed optometry school would be less than 20 miles away from Southern California College of Optometry. 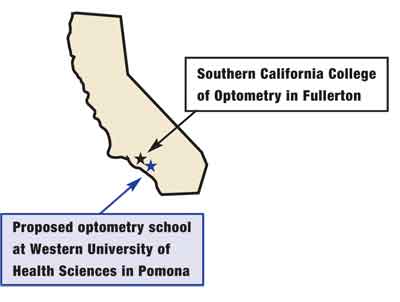 But, it would be less than one mile away from the office of optometrist Jack Worden, who has practiced in Pomona since 1963. Dr. Worden doesnt predict a new college of optometry would affect his practice because hes been around so long. However, he does see it as a barrier for new O.D. grads looking to start a practice in town.

Dr. Wordens main concern is the impact the new school would have on optometry in general. I would question what the [universitys] true motivation is: to start a school to turn out excellent practitioners, or to just get a larger student body?

Meanwhile, another new optometry school may be on the horizon in Texas. The University of the Incarnate Word, a Catholic institution in San Antonio, currently includes pharmacy and nursing programs, and is reviewing a proposal for a new school of optometry.