As optometric physicians, we manage a wide variety of patient cases that involve systems beyond the eye, from diabetic retinopathy and obesity-related ocular disease to cataracts, diplopia and neurologic diseases such as Horner syndrome. At the heart of all of these conditions is a small yet critical part of the brain—the hypothalamus.

You’ll recall from anatomy and physiology primers that the hypothalamus links the nervous system to the endocrine system via the pituitary gland, making it one of the most important transmitters in our bodies. When you understand the intricacies of the hypothalamus, you gain a greater understanding of the body’s systems and how that physiology relates to the eye. 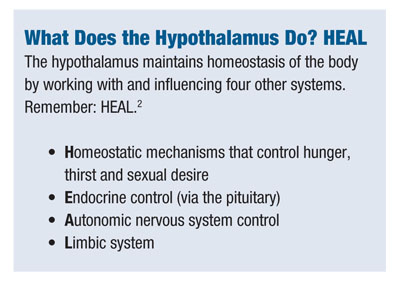 The hypothalamus has three regions:
• The anterior or “supraoptic” region includes the suprachiasmic, supraoptic, anterior and paraventricular nuclei. This is where axons are projected to the posterior pituitary and other sites such as the spinal cord.
• The middle or “tuberal” region consists of the dorsomedial, ventromedial and arcuate nuclei.
• The posterior or “mammillary” region includes the medial, lateral and intermediate mammillary nuclei, and the posterior nuclei that project to the thalamus and tegmentum regions of the midbrain.2,3

Many Jobs
The hypothalamus is only about the size of a pearl, yet it is a master multitasker. Neuroanatomists refer to it as the “homeostatic head ganglion” because it serves as the central regulator of homeostasis. Basically, it’s charged with maintaining balance under ideal physiological conditions and in times of emotional stress, known as a “stress response.”
The hypothalamus receives information from the limbic system (concerned with mood and emotion) and retina.1,2 It helps control pituitary endocrine function and has an efferent relationship with the autonomic nervous system (ANS) (see “What Does the Hypothalamus Do?,” right). Hypothalamic nuclei are sensitive to changes in hormone levels, electrolytes and body temperature. 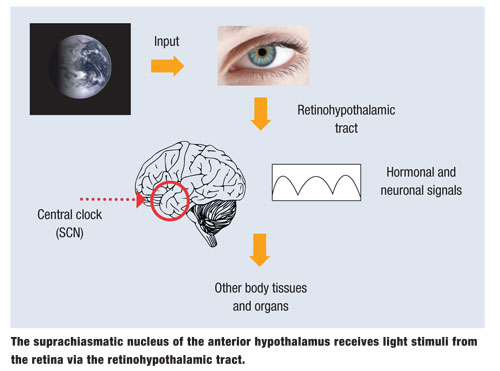 The ventromedial part of the hypothalamus has an important function in controlling the sympathetic nervous system (SNS), which is responsible for pupil dilation, while the lateral hypothalamic area controls the parasympathetic nervous system (PNS), responsible for pupil constriction. The hypothalamus secretes and inhibits hormones that control endocrine functions and produces antidiuretic hormone, also known as ADH or vasopressin, and oxytocin. Loss of ADH is known as neurogenic diabetes insipidus.

The hypothalamus helps control hunger, thirst, water and thermoregulation. The ventromedial hypothalamus is often called the satiety center, while the lateral hypothalamic region is involved with hunger. These areas operate under the influence of several hormones, including insulin, leptin and ghrelin.1,4 Osmoreceptor input from atrial stretch receptors in the heart and arterial baroreceptors, along with hypothalamic hormone receptors such as angiotensin II, help regulate thirst.1 The hypothalamus, along with the limbic system, may also be involved in memory and play a role in sexual and emotional behavior, independent of its endocrine influences.1

A New Pathway
The discovery of inner retinal ganglion cell photoreceptors (RGCPs) in 2002 gave clinical investigators a better understanding of retinal photoreception. No longer were rods and cones accepted as the only sources of human photoreception.

The primary function of RGCPs is gross detection of environmental light with eventual input to non-visual brain centers. About 3,000 RGCPs, with large receptive fields, exist in each human retina and express the blue-light sensitive photopigment melansopsin in their dendrites, cell bodies and axons. This relatively newly discovered pathway is called the retinohypothalamic tract.1,2,5 Age-related crystalline lens yellowing and other cataractous changes reduce circadian photoreception. This is why cataract surgery provides older adults with more youthful circadian photoreception, resulting in improved sleep patterns.6

Ambient illumination is transmitted not only to the hypothalamus, but also to more than a dozen brain centers, including the pretectal nucleus, which is involved in the pupillary light reflex.

The next time you diagnose pupil abnormality, thyroid eye disease or diabetic cataract, think about that small, vital part of the brain that is involved in the mediation of endocrine, autonomic and behavioral functions.