Topical non-steroidal anti-inflammatory drugs, or NSAIDs as we typically call them, have been a valuable addition to the ophthalmic pharmaceutical arena for more than 25 years.

In the body, NSAIDs work to diminish inflammation and mediate pain by inhibiting the cyclooxygenase (COX) enzymes. These enzymes catalyze the conversion of arachidonic acid into prostaglandins and thromboxanes––both powerful mediators of inflammation.

While not as potent a class of anti-inflammatory drugs as the corticosteroids, NSAIDs still possess a significant ability to ameliorate pain and reduce the signs of ocular inflammation, including postoperative cells and flare within the anterior chamber.1,2 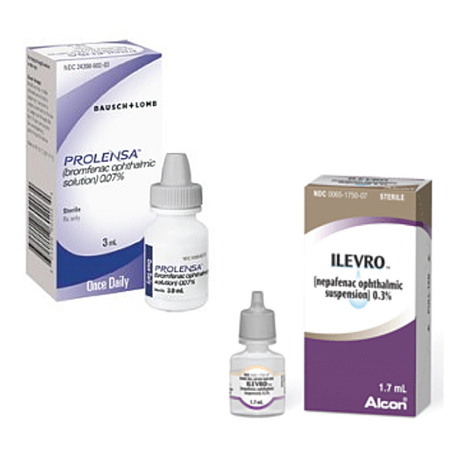 The Earliest Topical NSAIDs
The first commercially available topical NSAID to receive FDA approval was Ocufen (flurbiprofen sodium 0.03%, Allergan) in 1986. Ocufen’s only indication was for inhibiting intraocular miosis during cataract extraction. But physicians who used this drug soon realized that it had an additional benefit––Ocufen also helped control some of the inflammation and pain following surgery.

When Voltaren (diclofenac sodium 0.1%, Novartis Ophthalmics) received approval in 1991, it was the first topical NSAID to carry a specific indication for postoperative pain. Then, Acular (ketorolac tromethamine 0.5%, Allergan) was granted FDA clearance in late 1992. While Acular was initially approved for the treatment of seasonal allergic conjunctivitis, it later secured approval for postoperative inflammation.

NSAIDs in Eye Care
Primary care optometrists use this class of medications far less frequently than our surgical counterparts in ophthalmology––particularly because the approved indication for these drugs is almost exclusively for the management of postoperative complications. Topical NSAIDs are currently accepted as the standard of care for postoperative management of cataract surgery, along with prophylactic antibiotics and corticosteroids.3

However, there are a number of off-label applications for topical NSAIDs, such as temporary relief of ocular pain due to superficial corneal insult. Because of their ability to inhibit prostaglandin synthesis, these drugs help to rapidly and effectively break the pain cycle.2

NSAIDs are used for corneal abrasions, corneal foreign bodies, recurrent corneal erosions and chemical keratitis, among others. Additionally, many optometrists are actively involved in the comanagement of surgical patients.

So, it’s important to understand the proper use of topical NSAIDs, including appropriate dosing and potential side effects. Knowledge of these drugs’ attributes also can help us make better decisions about drug selection and recommendation.

• Prolensa. Bromfenac sodium has been a popular NSAID choice since 2005, when Xibrom (Bausch + Lomb) was first introduced in the United States. The halogenation of the bromfenac molecule with bromine is believed to impart increased potency and penetration into the ocular tissues. Prolensa actually contains a slightly lower concentration of bromfenac than its predecessors (Bromday and Xibrom both contained 0.09%). Like the previous formulations, it is preserved with 0.005% benzalkonium chloride (BAK).

Prolensa is indicated for the treatment of postoperative inflammation and reduction of ocular pain in patients who have undergone cataract surgery.4 The pH of Prolensa is 7.8, which is more physiologically neutral than that of Xibrom or Bromday (both 8.3).4-6 According to the manufacturer, this pH modification makes the bromfenac molecule more lipophilic and further improves penetration through the cornea.7

Although there currently are no head-to-head studies comparing Prolensa and Bromday, both once-daily formulations have been shown to be effective in managing postoperative inflammation in cataract patients.8

• Ilevro. Alcon’s Ilevro is a newer version of Nevanac (nepafenac sodium 0.1%, Alcon). Nepafenac is a prodrug of the more potent anti-inflammatory agent amfenac.9 In the body, prodrugs are converted to a more active drug state through enzymatic processes.10 Because nepafenac is a lipophilic, neutral molecule, some researchers have hypothesized that it may have greater corneal permeability than other NSAIDs that have acidic structures.9,11,12

Ilevro is indicated for the treatment of pain and inflammation associated with cataract surgery.13 In clinical trials, Ilevro dosed once daily was superior to its vehicle at completely clearing inflammation by day 14 post-op.14 In a similarly structured trial, Ilevro dosed once daily was found to be equivalent to Nevanac dosed TID.15 Both Ilevro and Nevanac are preserved with 0.005% BAK.

In addition to offering a 200% greater concentration of the active drug than its predecessor (0.3% vs. 0.1%), Ilevro has a number of other favorable attributes when compared to Nevanac. It has a lower pH (6.8 vs. 7.4), reduced molecule size, and demonstrates faster dissolution when instilled onto the ocular surface.16 Also, it contains several inactive ingredients that may help improve comfort, tolerability and ocular surface contact time––including guar gum, propylene glycol and carboxymethylcellulose.13

Although not one of the classes of drugs more commonly prescribed by optometrists, NSAIDs are a valuable addition to our pharmaceutical armamentarium and a crucial component of postoperative cataract management.

In order to better serve our patients and communicate with our ophthalmologic colleagues, increased familiarity with the newest agents is essential.

Drs. Kabat and Sowka are consultants to Alcon. They have no direct financial interest in any of the products mentioned.