You know the scenario: A patient comes in clutching a coupon advertising a free trial offer for 30-day continuous-wear lenses. Another tells you that she wants a prescription for a well-marketed brand name pharmaceutical for dry eye that she saw advertised on TV.

There is little doubt that the trend of consumerism affects all areas of health care, including optometry. With easy access to the Internet and daily exposure to direct-to-consumer ads in newspapers and magazines, on television and online, patients now have more information at their disposal than ever before.

This often shapes their demands of their O.D.s. Some optometrists now find that the patient-doctor relationship has changed as a result. Others are making changes in their practices to adapt to this new patient/consumer mentality.

There is a changing dynamic between the doctor and the patient, says optometrist Brian Chou. Before, if a doctor presented something to a patient, it was the gospel. Today, patients are savvier. It is not uncommon for them to get information from friends and family and manufacturers. You can look at this extra layer as something good, because there is more information. But, there is a danger in the way people might interpret and understand this information.

Most optometrists attribute the shift in their patients mentality to the Internet and the trend of direct-to-consumer advertising. Several soft contact lens manufacturers embrace this as a prudent marketing tool and advertise directly to the consumer audience. Proponents of direct-to-consumer advertising believe that it is an effective way to reach consumers, that it provides relevant health-related information and that it encourages doctor-patient communication. (See Companies Embrace DCT, below.)

I think in some respect, we are seeing an increase in consumerism. But, many fail to recognize it because there seems to be a constant bombardment daily, says , optometrist Joseph P. Shovlin. Its simply an acceptable form of patient communication today.

Promotional spending by pharmaceutical manufacturers also has risen steadilyan average of 16% in the past few yearsand is influencing patients, according to a recent study by the Henry J. Kaiser Family Foundation.1 Nearly one-third of adults in the study say they have talked to their doctors about a drug they saw advertised, and 44% of those who talked to their doctor received a prescription for the medication they asked about. 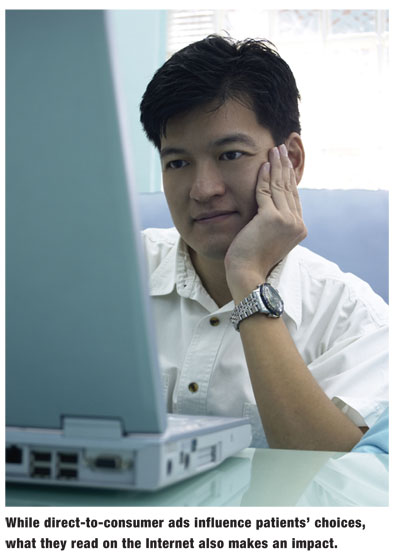 When it comes to disease and surgical care, which is what we do, the drug and IOL companies must think that consumers are playing a greater role in their care, because they are planning more and more direct-to-consumer ads, says optometrist Paul Ajamian, of Omni Eye Services in . Alcon is planning on advertising the ReSTOR multifocal lens implant direct to patients sometime in the near future. And, we have some companies like Allergan marketing Restasis aggressively, even though it is a prescription medication.

Fortunately, the pharmaceutical/ topical agents that are being advertised are good drugs, says Mark Dunbar, O.D., of the Bascom Palmer Eye Institute in . From my perspective, it has the potential to be a good thing.

Specifically, brand recognition may encourage patients to take prescribed medications as directed and improve compliance, Dr. Dunbar says. It also can provide a more heightened awareness of a patient"s ocular problem and assurance that a treatment is available.

While direct-to-consumer ads may influence patients choices, what they read on the Internet also makes an impact. Although there are reputable Web sites that offer consumers accurate information about vision and vision problems, some information and special Internet offers may not be in the patient"s best interest, particularly when it comes to self-diagnosis or prescription purchases. An example: online pharmacies that fill prescriptions without proper doctor verification and encourage patients to behave as their own doctors. The problem is that the corporate agendas of these drug and device distributors do not always coincide with whats truly best for patients as much as their own profits and stockholder returns, Dr. Chou says.

Additional ways that the Internet affects optometrists and other health-care providers: sites that allow consumers to research specific physicians. Some of these sites provide information on the O.D.s educational background, professional affiliations and disciplinary actions, and others allow patients to rate their doctors.

, optometrist Ian Ben Gaddie points to the dispensing of contact lenses as an example of how much consumerism has affected optometry. As more patients assume they can get their contact lenses cheaper online than from an O.D., they view contacts as a commoditymuch like shopping for the cheapest computer on the Internetand not as a medical device, he says.

Like contact lenses, LASIK has been affected by the consumer trend, according to Dr. Gaddie. While do-it-yourself home kits ranging from pregnancy tests to blood glucose tests have become popular with consumers, LASIK remains a medical procedure, yet some patients may have logged onto the Lasikathome Web site, which advertises affordable in-home LASIK surgery you can do yourself!

Patients who are exposed to special offers and other direct-to-consumer advertising may be heavily influenced by what they see in these marketing campaigns. Like other practitioners, Ive had patients come in asking for specific brands of contact lenses which theyve seen advertised on TV, Dr. Chou says. Ive found this a paradoxical arrangement, because manufacturers are creating a consumer want for something patients have no prescriptive authority over. Instead, the manufacturers are using patients as the pawn to influence doctor prescribing, rather than going the traditional route of educating the doctors why the particular drug or contact lens is suitable for their patients.

Some O.D.s we talked with, however, feel that the manufacturers are encouraging relationships between the product and the patient, minimizing the value of the doctor. While a particular drug or lens may be appropriate, there are times when the lenses or drug a patient requests are not. Then, the doctor must spend extra time explaining to the patient why it is not a suitable lens/drug for them, Dr. Chou says.

There are instances when patients who are prescribed custom toric lenses try to get their prescription filled at a discount outlet only to find that they are not available. One discount outlet encouraged a keratoconus patient to ask me to prescribe them a more consumer friendly lens that is cheaper, advertised on TV and available through the distributor, Dr. Chou says. In such cases, the consumer marketing by the discount outlet vilified the doctor, in fact, doing the patient a disservice. It became unnecessarily time consuming for the doctor to re-educate the patient why they require a special custom lens and how they have been duped by the alternative distributor.

Another problem: patients who come in with coupons for free contact lenses but did not read the fine print and realize that professional fees may apply. This, too, can create animosity between the patient and the optometrist.

Another area in which consumerism has appeared: vision insurancenamely, how patients view their benefits and what they think their plans should cover. Patients feel that because they pay for insurance means that they are entitled to certain things that insurance doesnt necessarily pay for. They feel like Ive paid for this already, I don"t want to pay more for additional material, Dr. Gaddie says.

Today, patients demand more of their optometrists time, frequently reschedule appointments and may even answer their cell phone during an eye exam. But, Dr. Gaddie does see some positives in this move toward a consumer-driven patient. For example, it makes the local marketplace more competitive.

The drawback, however, is that patients make decisions that were once made by their doctors. It is harder to be a definitive doctor, Dr. Gaddie says. Patients may start doubting you if they have all this preconceived information.

Adds Dr. Chou: Doctors today are not perceived as much of an authority as in years past. If you said a patient needed a medicine, no questions were asked. Now, I may have to rationalize with the patient why they need glasses. Its not confrontational, just more patient centered.

Although patients do not have prescribing authority, their requests can heavily influence health-care providers, studies show. In one landmark study, trained actors posing as patients with major depression or adjustment disorders made 298 visits to 153 primary-care physicians.2 The physicians were unlikely to prescribe an antidepressant, but prescription rates did increase several-fold following a brand-specific or general request.

I cant say that Ive actively changed anything with my practice in response to increasing consumerism, Dr. Chou says. But with that said, I think the majority of practitioners, including myself, have nevertheless changed the way that we practice in a passive fashion, paralleling the consumer movement.

With innovative technology, the scope of vision correction now includes wavefront-guided glasses, overnight corneal reshaping, presbyopic IOLs, hybrid lenses, digital retinal imaging, soft-toric multifocal contact lenses, and silicone hydrogel contact lensesjust to name a few. Combine that with increased availability of information on the Internet and direct-to-consumer advertising, and you have patients who ask staff and doctors about treatments which they may not know about. Simply put, the patients questions are more varied then before, Dr. Chou says.

This makes staff training even more essential, so that those in the office are updated on new vision-correction options. Eye doctors increasingly use the Internet and electronic correspondence to stay up-to-date and in front of the information that patients may otherwise bring to them.

The push toward consumerism amongst patients has prompted Dr. Gaddie to discuss the cost of services and products with patients. Now, we have to be more up front and proactive and let them know why money spent with us is better spent with us than with someone else who doesn"t know about the health of their eyes.

As consumers want flexibility when making appointments, many optometrists have expanded their hours into the evening and weekends. Others send patients monthly newsletters, correspond with them via e-mail or do their own advertising. The surgeons in our group decided to go on TV a few years ago, touting what we have to offer in the form of cataract and refractive surgery, Dr. Shovlin says.

He adds: As a profession, I think we, along with other health-care professions, have gotten over any bad stigma associated with direct-to-consumer advertising. For the most part, manufacturers have done a good job advertising directly to our patients, so why cant we do this as well?

This push toward consumerism is evident in other health-care arenas. Optometry is not an exception to the rule,Dr. Chou says.

Consumers desire for fast and convenient care has spurred the launch of MinuteClinics, a Minneapolis-based group that now offers 83 clinics in 10 states. Their marketing slogan: Youre sick. Were quick. Patients can drop into these clinics without an appointment, and physicians assistants or registered nurses assess and quickly treat their aches and pains.

Will this fast and immediate access to medical care permeate into optometry? You can walk into a drug store now and get your blood pressure taken, Dr. Chou says. It is not unreasonable to think that maybe one day there will be autorefractors at the grocery store.