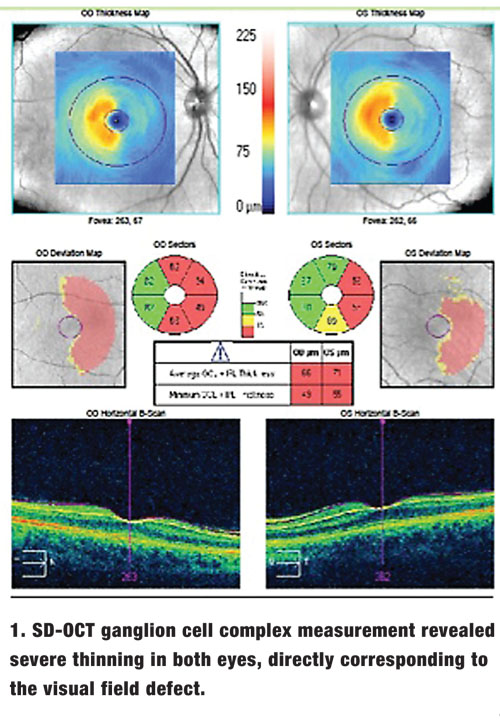 A 62-year-old white male presented to  our office for visual field testing after experiencing diminished right-field vision following a stroke.

Apart from the cerebrovascular accident, which affected the left side of his brain, he had no other neurological complaints and no history of trauma, headaches or head injury. Past medical history was additionally remarkable for hypertension, being controlled by a beta blocker. His past ocular history was unremarkable. Best-corrected visual acuity was 20/25 OU.

A chiasmal tumor, for example, is frequently associated with bitemporal visual field defect and could show sectoral atrophy of the optic nerve with associated thinning of the RNFL.1

Furthermore, it is not uncommon to observe visual field defects in patients whose occipital lobes have been affected by stroke. A patient with a history of stroke often presents with a correlated hemianopic or quadranopic visual field defect. Homonymous hemianopias are synonymous with vascular-related strokes affecting the posterior cerebral artery.2

RNFL thinning has also been associated with such hemianopic visual field defects.3 Clinical cases of RNFL associated with congenital occipital lobe damage have been reported.4

Other studies have shown that RNFL thickness is significantly reduced among patients with related hemianopic visual field defects.5

The retinal ganglion cells (RGCs) encompass the retinal nerve fiber layers. The majority of these RGCs synapse at the lateral geniculate nucleus (LGN). Hence, damage in the visual pathway—including effects on the cortex—can also cause retrograde atrophy of the RGCs.

There is a general consensus that, although RGC damage can occur in patients with a history of stroke, it is usually noted years after the incident. In an animal model, RGC degeneration was documented four years following occipital lobe ablation.6

A recent small case series showed a correlation between RGC defects and visual field defects documented shortly after the occurrence of a posterior cerebral artery infarction.7

Researchers evaluated three subjects—ages 66, 68 and 71—who suffered a stroke within the previous 12 to 36 months.
GCC measurements were taken at the macula from the internal limiting membrane to the inner plexiform layer. RNFL thickness was measured and visual field perimetry was performed.

All patients had MRI that confirmed a posterior cerebral artery infarction with no other damage noted anywhere in the visual pathway.

Thanks to Brad Sutton, OD, with Indiana University School of Optometry, for contributing to this article.