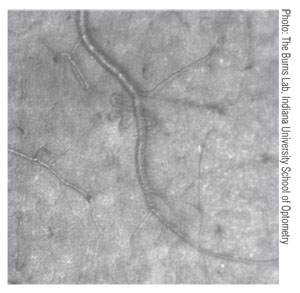 The researchers used the AOSLO to image the retinae of patients with non-proliferative diabetic retinopathy (NPDR). The researchers noted that many patients with only mild or moderate NPDR exhibited extensive microvascular changes, including the formation of corkscrew-shaped capillaries.

“We had not expected to see such striking changes to the retinas at such early stages,” said lead author Ann Elsner, PhD, professor and associate dean of IU’s School of Optometry. “There was damage spread widely across the retina, including changes to blood vessels that were not thought to occur until the more advanced disease states.”

In addition to capturing evidence of capillary remodeling, the AOSLO provided enhanced detail of clinically detectable microaneurysms and hemorrhages in NPDR patients. Further, it was able to detect early signs of vascular wall thickening and capillary closure.

“It is shocking to see that there can be large areas of retina with insufficient blood circulation [this early in the disease process],” said study coauthor Stephen Burns, PhD, IU School of Optometry professor and principal developer of the AOSLO.
While most of the study subjects were believed to have fairly mild symptoms based upon clinical findings, the AOSLO showed that oxygen and glucose transport to the retina was already partially compromised.

The researchers concluded that simply magnifying retinal fundus images of NPDR patients is insufficient for accurate detection of disease progression. Further research using the AOSLO could potentially help clinicians determine which patients have the most severe diabetic eye damage, and whether the microvascular changes could be treated or even reversed.