Instead of deterring your children from playing video games, consider joining them. A new studys results show that playing a high-action video game for an hour a day over the course of one month improved the spatial resolution of gamers vision by nearly 20%. 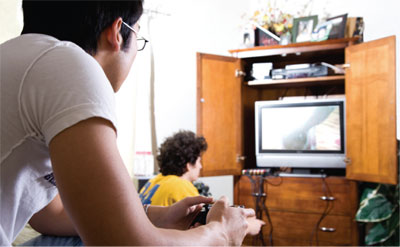 Study participants played either a complex first-person game or a simpler low-impact game for one hour a day for 30 days. In a crowding test at the completion of the study, gamers had to identify the orientation of the letter T amid other symbols.

When results were compared to those from a similar crowding test administered prior to the month of gaming, researchers found that the participants who had played the first-person shooter game were nearly 20% more likely to correctly identify the direction of the T, with better tolerance for distracting symbols located close to the T. Those gamers who played the low-intensity game showed no improvement.

When people play action games, theyre changing the brains pathway responsible for visual processing, says cognitive psychologist and researcher Daphne Bavelier, Ph.D., one of the studys authors. These games push the human visual system to the limits, and the brain adapts to it. That learning carries over into other activities and possibly everyday life.

The research team plans to use these results in further examination of the brains response to visual stimuli; people with visual deficits may be able to increase their acuity with rehabilitation software that builds on the reaction speed required by video games, the researchers say.