Q: I have a patient with age-related macular degeneration (AMD) who said his retina specialist wants to do a series of injections in his eye over the next six months. What should I tell him?

A: First, let your patient know that these injections will offer him a chance to slow or halt the progression of his AMDand possibly improve his vision, says optometrist Mark Dunbar, director of optometric services at the Bascom Palmer Eye Institute in .

Retina specialists now tend to employ one of two similar drugs to treat neovascularization secondary to exudative AMD: Lucentis (ranibizumab) and Avastin (bevacizumab), both produced by Genentech. These drugs are overshadowing current mainstay treatments, such as thermal laser photocoagulation and photodynamic therapy, which aim to destroy new vascular growth. Instead, Lucentis and Avastin stem neovascularization itself by blocking the angiogenic factorsnamely vascular endothelial growth factor (VEGF)that cause it. 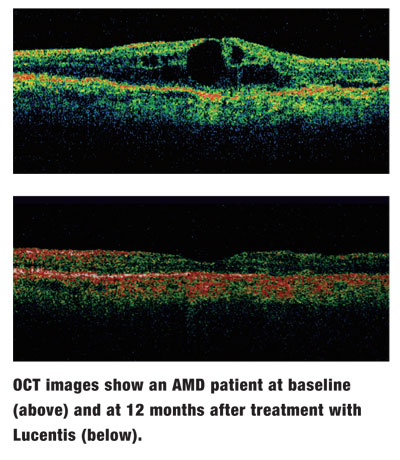 These drugs have also eclipsed Macugen (pegaptanib, Eyetech/Pfizer), another anti-VEGF intravitreal injection that was approved in December 2004. After one year of Macugen treatment, 70% of patients lost fewer than 15 letters of visual acuity, while 6% of patients demonstrated improvement in visual acuity.1 Compare this to one-year results with Lucentis, in which nearly 95% of patients treated with 0.5mg doses maintained or improved vision at 12 months, and 34% improved vision by 15 letters or more.2 Avastin appears to produce equivalent results.

So, what else can you tell your patient? The O.D. can play an important role in letting the patient know what to expect, Dr. Dunbar says. If the patient does have active leakage from a neovascular membrane, then let him know that this series of injections in the eye could indeed help him.

Explain that the injection is not painful at allthe eye is anesthetized, and the drug is injected under sterile conditions. The treatment is very well tolerated, he adds. You could also talk about the differences between Lucentis and Avastin.

How are they different? Avastin was the first anti-VEGF drug approved by the FDA (in February 2004). However, it was approved not as an intravitreal injection for wet AMD, but as a systemic treatment for colorectal cancer. Its use in the eye is considered off-label. Retina surgeons, who recognized the drug as a VEGF inhibitor, turned to Avastin while awaiting FDA approval for Lucentis (in June 2006). Meanwhile, the success of Avastin in the eye and its widespread usage prompted doctors to urge Medicare carriers to pay for the off-label treatment. Intravitreal Avastin for wet AMD is now reimbursed by Medicare in almost every state.

Lucentis, which Genentech designed specifically for the eye, has been heavily studied for its safety and efficacy. Its ranibizumab molecule is about one-third the size of Avastins bevacizumab molecule. Researchers initially thought the larger size of the Avastin molecule would prevent the drug from entering the subretinal space to induce a treatment effect, Dr. Dunbar says, so the company developed the smaller-molecule Lucentis. Furthermore, Lucentis is genetically engineered to have greater affinity for VEGF, so more of the drug may penetrate all the layers of the retina. Then again, since Avastin has a larger molecule, it could remain in the eye longer.

Still, the final decision between the two drugs is often based on dollars. The cost for Lucentis can be $2,500 to $3,000 per injection, while a single treatment with Avastin could be $100 to $200, says Dr. Dunbar. Even with Medicare coverage [of Lucentis], patients are still responsible for 20% of the cost if they have no supplemental insurance, he says.

Its not always a question of cost, though. Some patients and retinal surgeons may be more comfortable using the FDA-approved Lucentis rather than the off-label Avastin, Dr. Dunbar says. No studies have compared the two drugs head-to-head to determine if one has a clinical advantage over the other.

To that end, the National Eye Institute (NEI) announced in October 2006 that it will fund a new multicenter clinical trial to compare Lucentis and Avastin for the treatment of advanced AMD. This is more than just a cost study, the NEI has emphasized. The primary goals are to better understand the safety and efficacy of intravitreal Avastin, and to develop better dosing and re-treatment guidelines for both drugs. One-year follow-up data are expected in 2009.

For comanagement, the optometrists role is likely to be twofold: educating the patient before he undergoes the procedure and monitoring vision during the treatment process, Dr. Dunbar says. Also, If you have access to retinal imaging and you identify a patient who has a recurrence of macular edema or leakage, you can play a role in getting that patient back to the retina specialist sooner, he says.