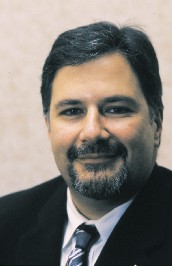 A 69-year-old white female presented complaining of decreased distance vision with her current spectacle prescription. Her near vision was not a problem. The spectacle prescription was about one year old, which was the last time she had her eyes examined. At this first visit, she reported that her previous eye doctor told her she had small cataracts, O.U.

Entering visual acuity was 20/80 O.D. and 20/30 O.S. Pupils were equal, round and reactive to light with no afferent pupillary defect. Extraocular motilities were full in all positions of gaze. Refraction with increased minus at distance yielded best-corrected acuity of 20/30- O.D. and 20/30+ O.S.

Slit lamp examination was essentially unremarkable in both eyes except for the presence of bilateral corneal arcus. Applanation tensions were 15mm Hg O.D. and 14mm Hg O.S. at 10:45 a.m.

Viewed through dilated pupils, her crystalline lenses were characterized by nuclear and cortical cataracts; this was greater O.D. than O.S. and consistent with her best-corrected visual acuity. Her optic nerves were characterized by symmetric cupping of 0.50 x 0.60 O.U. Bilateral nerve fiber layer hemorrhages (Drance hemorrhages) were present at the inferior neuroretinal rims at 7 oclock O.D. and 5 oclock O.S. The inferior neuroretinal rims O.U. were moderately thinned from 4 to 8 oclock.

Her vasculature was characterized by grade I arteriolarsclerotic retinopathy O.U., and spontaneous venous pulsations were present bilaterally. Her macular and peripheral retinal evaluations were normal. There were bilateral posterior vitreous separations.

Auscultation for carotid bruits was positive on the right side at the bifurcation but negative on the left side.

I diagnosed the patient with bilateral normal-tension glaucoma and prescribed Xalatan (latanoprost, Pfizer) 1 drop O.U. h.s. She is scheduled for follow-up.

This case, while seemingly straightforward, highlights two very important points we must consider in the work-up and evaluation of glaucoma suspects, especially suspects for normal-tension glaucoma.

In this particular case, my diagnosis of glaucomatous optic neuropathy was not based primarily on her thin corneas or even the thinned neuroretinal rims inferiorly. Rather, it was the presence of the Drance hemorrhages that first highlighted the distinct probability of optic nerve disease.

In any case, the first important point to remember when seeing a patient with a nerve fiber layer hemorrhage is not the raw percentage of hemorrhages in patients who have glaucoma, but the significant lack of such hemorrhages in a normal population. Because nerve fiber layer hemorrhages are so uncommon in a non-glaucomatous optic nerve, the presence of the hemorrhage in an optic nerve warrants a significant optic nerve evaluation for glaucoma. In this case, secondary findings of thin CCTs and optic nerves that did not follow the ISNT (inferior-superior-nasal-temporal) rule contributed to the overall picture, but the presence of the hemorrhages alone was enough to arouse significant suspicion of glaucoma.

If this patients CCTs were thicker, would that change the intervention? In my opinion, no. Again, the incidence of disc hemorrhages in patients who do not have glaucoma is so low that it could be considered rare. Moreover, this patient presented with bilateral disc hemorrhagesan even rarer event.

A patient newly diagnosed with normal-tension glaucoma should be managed and followed as any other glaucoma patient. But, in some cases, these patients may also present with an underlying systemic condition that is closely related to the glaucomatous optic neuropathy.

Several systemic conditions may put a patient at increased risk for developing normal-tension glaucoma or may be a contributing factor. Such conditions include sleep apnea, peripheral vasospasm, nocturnal drop in blood pressures, poor perfusion to the central nervous system, poor perfusion to the eye, cardiovascular disease, cardiac dysrythmias, peripheral vascular disease and atherosclerosis, and more recently, variations in diurnal IOP fluctuations.4,5 Also, it is estimated that in more than 6% of normal-tension glaucoma patients, intracranial compressive lesions are present.6 Any of the aforementioned conditions, therefore, must at least be suspected as a contributing factor in newly diagnosed normal-tension glaucoma patients.

In this case, the patient had an audible carotid bruit on the right side, suggestive of carotid artery disease. This, in turn, may be a significant clinical finding, as carotid obstruction is known to contribute to reduced perfusion to the ipsilateral eye. At this time, carotid studies are pending. Meanwhile, I have set target IOPs of <12mm Hg on all visits.