A 75-year-old white male, who not been to an eye care provider in several years, was recently referred for baseline diabetic retinal examination by his primary care provider. The patient has hypertension, rheumatoid arthritis, carotid artery disease and non-insulin dependent diabetes mellitus. Yet, he says, he "just needs new glasses."

The best that we could discern from the patient was that he's had type 2 diabetes mellitus for many years. He doesn't check his glucose levels but says that his primary care provider is "happy with his diabetes," which we assume means that he is adequately controlled.

He reported some type of cardiovascular event approximately 30 years earlier, but denied surgical intervention, in particular coronary artery bypass graft. He did report (and a noticeable scar was present) a right carotid endarterectomy approximately six months earlier— with either a residual 60% occlusion or a preoperative occlusion of 60%. He did not know which medications he was currently taking, and told my tech that we can get that information from his internist. When asked about medicine allergies, he replied, "maybe," but he couldn't remember for sure.

Upon further questioning, he evidently had cataract extractions OU several years ago, and possibly YAG capsulotomies shortly thereafter in at least one eye. Also, our vague historian reported something about "high eye pressures" at a visit to another provider, for which he never followed up.

He simply was not a good historian, did not know what medications he was taking and had no real timeline of previous illnesses and surgeries. In fact, the only thing he was certain of was that he just wanted new glasses. 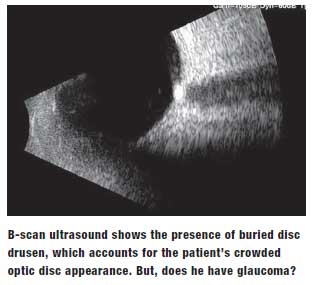 Entering visual acuity was 20/30- OD and 20/25- OS through mild hyperopic astigmatic correction. Pupils were equal, round and reactive to light and accommodation, with no afferent defect. Confrontation fields were slightly constricted superiorly OU, which I attributed to his moderate dermatochalasis. Blood pressure measured 194/82mm Hg, with a resting pulse of 58 bpm.

Slit-lamp examination of the anterior segments was unremarkable. Mild guttatae were present in both eyes, and the anterior chambers were deep and quiet.

Dilated examination showed that the IOLs were clear and centered in the capsular bags. Bilateral posterior vitreous separations were present. Cup-to-disc ratios were estimated to be 0.1 x 0.1 OU. Optic discs were of normal size, but the neuroretinal rims were full and suggestive of disc drusen (both anterior and suspected buried drusen).

The retinal vasculature was characterized by grade 1 hypertensive retinopathy and grade 2 arteriolarsclerotic retinopathy, with moderate arteriovenous nicking in both eyes. The retinal venules were slightly dilated. Both maculae were characterized by isolated intraretinal hemorrhages and scattered perifoveal microaneurysms, consistent with non-proliferative diabetic retinopathy. There was no clinical evidence of diabetic macular edema, although there was loss of the foveal reflexes and disruption of subfoveal retinal pigment epithelium (OD > OS).

There was no evidence of neovascularization of the disc, the iris or elsewhere in either eye.

Patients like this present many challenges to the busy health care provider—from lack of historical data to preconceived notions of what is going to occur during the office visit to compliance issues. As providers, we need to adapt to the individual circumstances of the encounter, while at the same time not compromising care.

In this particular case, I was dealing with someone who was unable to provide much of a relevant medical history. To confound the issue, the patient made it clear that he was just in the office for a new pair of glasses. We've all been faced with similar situations. The question is: How do we find the best course of action? Just as there are varied scenarios that hamstring our clinical evaluations, so too are there varied solutions to these patient encounters.

Considering this patient was clearly unwilling to undergo multiple tests on this initial visit, I had to prioritize which tests I deemed absolutely necessary to make an initial diagnosis on that day, and to reschedule further testing for a later date. Whether he will comply with further visits and evaluation remains to be seen, but I do have an obligation to render appropriate care at the moment of the patient encounter.

As such, I was able to determine that the diabetic retinopathy was mild and did not coincide with neovascularization or macular edema. Nothing more needed to be done regarding the retinopathy at this visit, other than photodocument it.

The elevated IOP was of concern. Fortunately, we were able to slip in a pachymetry reading at this visit, which revealed rather thick corneas (partially accounting for the high tonometry readings).

While the cup-to-disc ratios were small, the clinical picture was clouded by the appearance of disc drusen. However, given the patient vasculopathy, it's possible that the crowding of the disc is related to separate optic nerve disease. Accordingly, I wanted to establish baselines for the optic nerve at this visit, in the context of both ocular hypertension as well as disc drusen, and possibly other disorders of the optic nerve.

Visual field testing was unlikely to be productive, so I deferred it for a future visit. But, I was able to talk the patient into fundus photography, which would help establish baseline optic nerve images, as well as baseline diabetic retinal images. We were also able to obtain consent for B-scan ultrasonography, which indeed showed the presence of buried disc drusen that would certainly account for the crowded optic discs.

But does the patient also have glaucoma, or at least ocular hypertension with a risk of neuroretinal rim damage due to the elevated IOP? At this initial visit, the best I could firmly say was: "I don't think so," which is not how I like to finish patient encounters—I'd prefer to make a diagnosis one way or the other. But in reality, a patient must take at least some responsibility for his own health care. And, in this particular case, the patient wasn't upholding his end of the doctor/ patient relationship. Because of that, I could only do those things that I believed were most important at that time.

But this case also brings up another question in making a diagnosis of glaucoma in patients with optic disc drusen: How do you evaluate the neuroretinal rim for glaucomatous damage in the presence of disc drusen? The answer goes back to a basic tenet of glaucoma: It is a progressive disease that is known to cause structural and functional changes to the optic nerve over time.

The key words here are "over time." Frankly, patients with disc drusen who also have glaucoma don't typically have the characteristic thinning and erosion of the neuroretinal rim because of the crowded nature of the disc. They will, however, demonstrate loss of rim tissue and volume over time if the glaucoma is progressing. So, in these cases, it is imperative to monitor for both structural and functional changes over time.

Are these cases complex? Yes, they can be. Can a diagnosis of glaucoma be made easily? Not usually in one or two visits. Diligent monitoring is key here—over time.

For this patient, I did not have enough evidence to demonstrate glaucoma at the conclusion of the initial visit. Therefore, we scheduled him for follow up in four months for visual field testing, gonioscopy, optical coherence tomography and Heidelberg Retina Tomography (HRT-3, Heidelberg Engineering). Over time, I'll be able to determine if there is change. Whether he ventures back into the office remains to be seen. Take what you are given today, and give it your best shot. That can work for medicine, and life in general.