A 73-year-old black male presented for a routine eye examination. His chief complaint was blurred vision at distance and near while using his current spectacles.  He also reported occasional flashes of light and floaters, but he said that these have occurred for years without any recent increase in frequency or severity.

His systemic history was remarkable for diabetes mellitus, high cholesterol, spinal stenosis and cancer of the bone, kidney, bladder and prostate. He had a kidney removed in 2000 secondary to the cancer. He also received chemotherapy for five months until April 2005. He was not currently receiving any chemotherapy.

His best-corrected entering visual acuity through +4.00D spectacles was 20/25 at distance and near in both eyes. His external examination was normal. There was no afferent pupillary defect in either eye. His refraction was stable, with negligible changes.

The pertinent posterior segment finding of the right eye is demonstrated in the photograph. 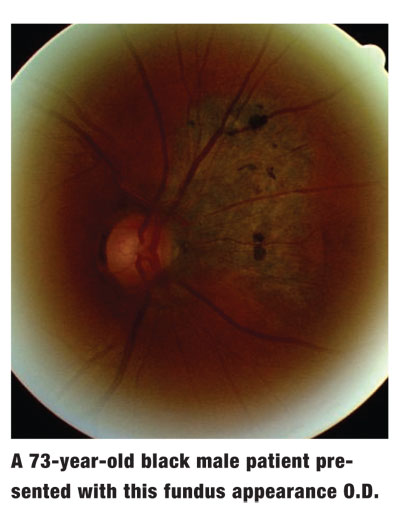 Thanks to Jennifer Buntman, O.D., of , for contributing this case.

The diagnosis in this case was a choroidal nevus. What makes this case interesting is the potential for malignant choroidal melanoma secondary to the patients systemic history.

Choroidal nevi have been referred to as benign choroidal melanomas, which are the most common primary intraocular tumors in adults.1-3 They are defined as benign, flat, or slightly elevated slate gray lesions that may appear inside the eye or on its surface.1-3 Their coloration is attributed to a focal accumulation of normal melanocytes at the level of the uvea.1-3

These nevi are similar to freckles in that they dont typically change or grow.1 Their margins are typically indistinct. Overlying areas of drusen are often noted within their boundaries. Geographic patches of orange pigment may overlie the lesion but may also signify an early sign of malignant transformation.3

In most instances, choroidal nevi remain less than 2 disc diameters (DD) in size, although they become as large as 5DD in some cases.2 In rare cases, the nevus must be biopsied and examined for melanoma (cancer) cells.1 While choroidal nevi do not typically lead to cancerous tumors or seeding of distant organs, the rate of malignant transformation within a 10-year period is estimated at 21 in 100,000.2

Malignant choroidal melanomas, in contrast, appear as mottled, often significantly elevated lesions that range in coloration from white to greenish-gray and may contain an overlying lipofuscin, which appears as an orange pigmentation.2 As they grow, they may break through Bruchs membrane, taking on a mushroom-like appearance with a possible secondary serous retinal detachment. Most malignant melanomas are larger than 10DD at the time of diagnosis.2

In malignant melanoma, the melanocytes undergo neoplasia, reproducing at a faster rate than usual and resulting in a dysfunctional tumor mass.2 The tumor is capable of not only local extension but also of distant metastasis.2

The median age at the time of diagnosis for malignant melanomas of the choroid ranges from 55 to 62 years. Host characteristics such as light pigmentation (skin, hair and eye color) and genetic factors, as well as environmental exposures (sunlight and chemical), have been associated with increased risk.4,5,8

Patients who present with choroidal melanomas are generally asymptomatic unless the lesion grows into the proximity of the macula. This patient had a nevus and was asymptomatic because nevi rarely interrupt visual function. (His blur was unrelated to the nevus.) Patients with melanomas that encroach on the macula may experience metamorphopsia, acuity loss, visual field deficit and/or a hyperopic refractive shift.2

Nevi of 2DD or less are generally harmless and only require documentation and photography. B-scan ultrasonography can also be performed to try to discern depth. Yearly follow-up is adequate. But, nevi between 2DD and 5DD are more suspicious; they require expert evaluation and six-month follow-up.

Consider any lesion larger than 5DD to be  a malignant melanoma until proven otherwise.2 Malignant melanomas present a potentially life-threatening situation because of the propensity toward metastasis.2 These tumors have been known to spread to the liver, lungs, skin and gastrointestinal tract.2

Immediate treatment of melanoma is only necessary when there is a sudden change or the lesion becomes sight-threatening. Photocoagulation is performed when choroidal neovascularization develops.3 If any change is noted, the tumor may be treated with radioactive plaque therapy or enucleation of the eye. The Collaborative Ocular Melanoma Study (COMS), supported by the National Eye Institute of the National Institutes of Health, has documented equal success rates for plaque radiation therapy or enucleation for preventing the spread of cancer.6

Large tumors usually are best treated by enucleation because the amount of radiation required to treat the tumor collaterally damages other ocular tissues.6 The COMS study found that radiation therapy prior to enucleation offered no benefit to patients with large tumors.6,7

Consistent with this patients history of cancer, he requires close monitoring to watch for conversion of this nevus to malignancy.