A little girl in kindergarten, a female AARP member, and a college wrestler may seem like they have little in common, but these patients could have more similarities than you think.

We have been seeing eating disorders across the age spectrum(patients) as young as seven and well into their 60s, says Cynthia Bulik, Ph.D., Director of the Eating Disorders Program at the of at . Men are indeed affected, although often underdetected, as they are less likely to seek treatment because it is perceived as a womens disorder. Most physicians just see them as lanky and never inquire about eating or exercise habits.

Eating disorders are serious illnesses with a biological basis modified and influenced by emotional and cultural factors, according to the National Eating Disorders Association (NEDA). Along with environmental factors, genetics play a key role in the onset of eating disorders, Dr. Bulik says. Genetic factors account for over 50% of liability to anorexia nervosa, and they are similarly high for bulimia, she says.

Nearly 10 million females and one million males suffer from eating disorders such as anorexia and bulimia, and approximately 25 million more struggle with binge eating disorder, NEDA reports. As the incidence of eating disorders increases and a wider variety of age groups and more males are being reported with these often life-threatening conditions, chances are you are already treating a patient with an eating disorder.

Eating disorders are not simply disorders of choice, Dr. Bulik says. They are not motivated by vanity, or the desires of young girls to look like models. Those are old myths that fail to capture the current science and understanding about eating disorders.

A recent study conducted by researchers at the British Pediatric Surveillance Unit found that eating disorders may appear even among 5-year-olds. The British team of researchers suggested that anorexia and bulimia may seriously affect childrens health, and that hundreds of children are hospitalized annually because of eating disorders.

This prevalence of younger girls developing some type of eating disorder is further supported by research from NEDA, which reports that four out of five 10-year-old children are afraid of being fat; nearly half of the children between first and third grades say they want to be thinner, and two out of 10 girls have some type of disordered eating.

On the other end of the age spectrum, elderly women are also developing eating disorders. Australian researchers at the found that anorexia and bulimia even affect women over the age of 60. According to the research, 60% of those included in the study were dissatisfied with their physical appearance and body weight. Of the 475 women in their 60s who participated in the study, 4% presented with symptoms of an eating disorder. The study found that, although eating disorders and body dissatisfaction are typical for young women, they do also occur in female elderly. Therefore, these factors should be included in the differential diagnosis of elderly presenting with weight loss, weight phobia, and/or vomiting.

Women who had eating disorders in youth who have gotten better, lived their livesoften married with childrenand develop anorexia again in mid-life.

Women who have had dormant symptoms for years but never develop the full-blown disorder until mid-life.

New-onset cases, in which environmental triggers play a role, that generally come later in life.

So, someone who is genetically vulnerable may only express the disorder later in life, when she starts exercising obsessively after a divorce and (embraces) a perception that the only way she will make it back on the dating scene is by losing 20 pounds, Dr. Bulik says.

The majority of patients with eating disordersspecifically anorexiastill develop them in the years around puberty, according to Doug Bunnell, Ph.D., clinical director of the Renfrew Center of Connecticut and board member of the National Eating Disorders Association. Those who develop bulimia nervosa usually do so later, generally around ages 13 to 17. Many patients with anorexia go on to develop bulimia within two years, Dr. Bunnell says. It appears to be common for adults to have had a history of childhood eating disorders that may go into remission but reappear in times of acute stress or trauma.

Eating disorders affect all races and classes, although there are some racial/ethnic differences. African American women have lower rates of anorexia and bulimia, but comparable rates of binge eating disorder, Dr. Bunnell says. 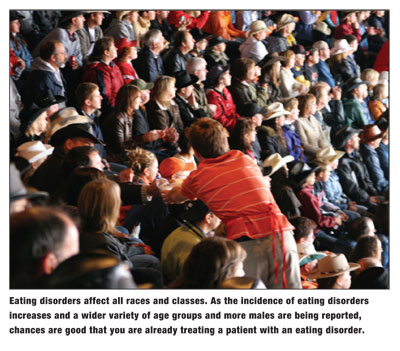 Athletes in certain sports are particularly at high risk for eating disorders. Female gymnasts, ice skaters, dancers and swimmers all have higher rates of eating disorders. In a study of Division I athletes, more than one-third of female athletes reported attitudes and symptoms that placed them at risk for anorexia. Male athletes are also at risk, especially those in sports such as wrestling, bodybuilding, crew, running, cycling and football.

Optometrists may be the only practitioners who see these patients on a regular basis, says Ellen Rome, M.D., chair of the media committee for the and the head of Adolescent Medicine at Cleveland Clinic. One obvious symptom is to look for a sudden shift in weight, she says. 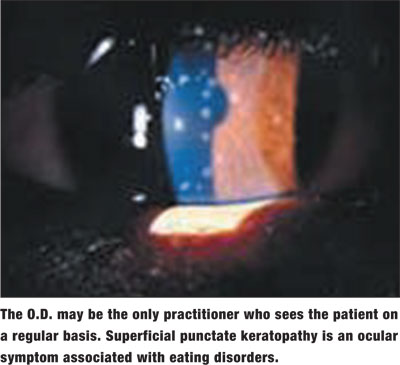 Other systemic symptoms include dizziness, low heart rate, and complaints of frequent headaches, Dr. Rome says. Inflamed cheeks can be a sign of vomiting, and callused hands and knuckles can also be potential symptoms.

Patients with eating disorders may present with the following ocular symptoms:

While many of these symptoms may be non-specific, a practitioner should hear, listen, look and recognize potential indicators that could mean that their patient has an eating disorder, Dr. Rome says. 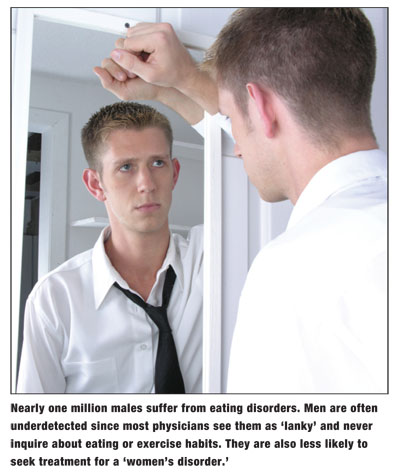 If you notice one of your patients has suddenly lost weight, it should prompt the question, How have you done that? Dr. Rome advises. You should also be an observer of moods. A distress indicator to look for is if a child used to be engaged and is now removed and quiet. Also, patients with anorexia may be less likely to look you in the eye.4

If the patient is a child, optometrists should comment privately to a parent following the exam, Dr. Rome says. Tell the parent, This is what I see, and I am worried about this. It is good to reach out. Never underestimate the role of a caring adult.

Children and adolescents are often resistant to treatment due to the intense anxiety about weight gain, Dr. Bulik says. Raise the issue of potential eating disorders with concern and respect, she adds. Raise your concerns with your patient or his or her parents in an open, caring and supportive manner. Do not blame, and be mindful of shame and denial, she says. Communicate your concerns. Share your concrete observations and why they make you think the patient should have an evaluation. Explain that you think these things may indicate that there could be a problem that needs professional attention.

Once the issue has been addressed, ask your patient or his or her parent to explore these concerns with a counselor, doctor, nutritionist or other health professional who is knowledgeable about eating issues. It is also helpful to have written material available, Dr. Bulik says. If your patient or family is unable to hear your concern at the time, have Web sites and written material available for treatment centers in your area.

Dr. Bunnell adds: It is important to address the concern, but to do it in a way that promotes discussion and minimizes the chance of denial. Expressions linked to health risks, depression, anxiety and the limitations of excessive thinness or binge/purge behaviors are better to focus on than direct expression regarding weight or shape. It is often the case that people with eating disorders will resist care and treatment, so it may be necessary to follow up an initial inquiry with consistent and persistent concern, he says.

Eating disorders are serious and also significant mental health problems. In fact, eating disorders have the highest premature mortality rate of any psychiatric diagnosis, Dr. Bunnell says. As the incidence of eating disorders continues to rise and the demographics of patients with eating disorders expand, optometrists should be aware of potential symptoms and the appropriate course of action in treating and referring these patients.

Treatment is complicated. Recovery is possible, but is hindered by stigma and insurance policies that deny adequate care for most patients and their families, Dr. Bunnell says. Optometrists can help by spreading the word about the significance and power of these disorders. We need to combat the perception that they are benign, vanity-based illnesses, when in fact they have significant genetic components and are, today, conceptualized as serious brain disorders.